Ambush lead vocalist Oskar Jacobsson was recently interviewed by Moritz for Germany’s Metal1.info in order to promote the Swedish rockers’ upcoming new album Infidel, which will be available on March 13, 2020. 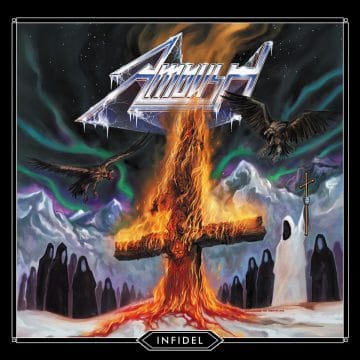 It was noted that Ambush‘s last studio album Desecrator was released some time ago (in December 2015) and Jacobsson was asked what the band had been up to since that time to which the guitarist replied:

“Two years after Desecrator, released late 2015, we toured quite alot and had loads of fun building new friendships and fans playing all over the world. After our Brazilian tour in 2017 though, our bassist Ludwig Sjöholm got sick in a very serious kidney disease. The doctors prevented him from playing live, and he was and to this day still is very sick and spends most of his time in bed. Therefore, for quite some time we had problems going forward with the band from that point, and decided only to play festivals here and there with our good friend Burning Fire from Night on bass. The songwriting process was still ongoing though, but we wanted to wait until we felt fully ready to record with a lineup that we believed in.

Burning Fire ended up playing bass on the Infidel album, as Ludwig only managed to play parts of Hellbiter due to his condition. Burning contributed a lot with his musicality and ability to drink tons of lager beer on this album. After the recordings, our guitarist Adam Ace Hagelin decided to leave the band for personal reasons, which delayed the release a bit. We were lucky to replace Adam with a new fresh axeman named Karl Dotzek & we now have a strong contribution on bass in mr. Burning Fire. I think this lineup of Ambush sounds amazing and I can’t wait for the upcoming touring!”