Out of This World feat. ex-Europe guitarist and Fair Warning singer to release debut and live albums

Out of This World consisting of guitarist / keyboardist Kee Marcello (ex-Europe), lead vocalist Tommy Heart (Fair Warning), drummer Darby Todd and bassist Ken Sandin will be releasing their debut album Out of This World as well as a live album titled Live From The Heat on April 2, 2021. 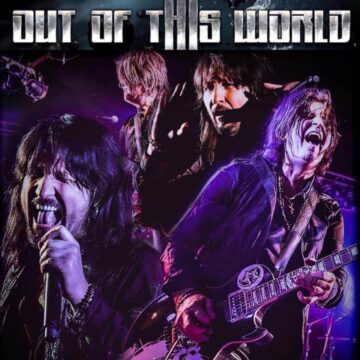 “Out of This World is the highly anticipated first album of the new band led by the voice of Fair Warning, Tommy Heart, and the legendary Europe guitarist Kee Marcello. The album has been mixed by Ron Nevison (KISS, Bad Company, Ozzy Osbourne, Lynyrd Skynyrd, Vince Neil, Meat Loaf, Heart, Chicago and many more). Nevison is a true genius in his field who has collaborated with Kee again after an unbelievable 33 years. It’s the first time that they have worked together since Europe’s Out of This World album. The keyboards on four of the new songs have been played by Deep Purple’s own Don Airey.

What can then be said about Tommy Heart and Kee Marcello? One of the best teams in the melodic rock / hard rock genre, hands down. Heart‘s voice just gets better and better as the years go by. Melodic one minute, soothing the next. Likewise, Marcello is on fire here and lays down some of his best and most memorable melodies and riffs in recent memory.

The sound is absolutely stellar thanks to Nevison who has given the band a sound that not only reinvigorates them, but also incorporates the soundscapes of the past. Modern and classic at the same time, if you will.

Every track on this beauty is worthy of attention whether it is the anthems “Twilight” and “Lightning Up My Dark”, the timeless shuffle anthem “Warrior” or the superb ballad “Only You Can Teach Me How To Love Again.” This record has everything fans of the classic Fair Warning and Kee’s Europe years could possibly ask for. And then some!

Supported by the killer rhythm section of Darby Todd (Gary Moore, The Darkness) and Ken Sandin (Alien), Out Of This World is not only delivering ten shining rock diamonds but also a special acoustic version of “Not Tonight” sung by Tommy and Kee as well as a full live CD on top of all of this mixed by Sebastian Roeder (Primal Fear, Rhapsody of Fire, Bonfire) and containing fan favourites from the Europe and Fair Warning catalogues mixed with three songs by Kee Of Hearts – the project where the duo originally met. The album will be released by JVC/Victor in Japan on the 2nd of April 2021.

For the rest of the world, it can be ordered here:

Out of This World album trailer: