French rockers Overdrivers have unveiled a video for their song “High Mountains” from their latest studio album She’s On Her Period, which was released back in November 2018. 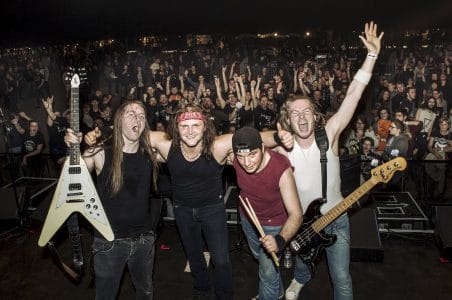 Overdrivers‘ album She’s On Her Period finished at #3 on the Sleaze Roxx’s Top Ten Albums of 2018 to which Sleaze Roxx stated:

“I have to give a big thank you to Sleaze Roxx reader Roger Miranda who recommended Overdrivers to me. One listen to three songs from the French Airbourne rockers and I had purchased their two studio albums. This is the revelation album of the year. Overdrivers play Airbourne type music perhaps even better than Airbourne themselves. However, the group’s lead vocalist Adrien Desquirez‘s vocal delivery is closer to AC/DC great Bon Scott than Airbourne‘s Joel O’Keeffe. Song titles like “The Best Blowjob In History,” “Show Your Boobies” and the title track on She’s On Her Period tell you all you need to know about the level of sophistication that Overdrivers bring to the table.

There’s no question that Overdrivers “borrow” quite a bit from Aussie rockers Airbourne from their look, presentation, stage performance and of course, music. That being said, I have no problem having Overdrivers carry the torch for Airbourne while the Aussie rockers continue to lay low after touring behind 2016’s Breakin’ Outta Hell. Unfortunately for Overdrivers, it seems that usually, only one band breaks out with a certain style and as long as they play songs so similar to Airbourne, the Overdrivers may continue to be France’s best kept secret.”

OVERDRIVERS video for ”High Mountains”, track 8 from the album She’s on her period.This album was recorded, mixed and mastered by Bertrand Charlet at Le ha…