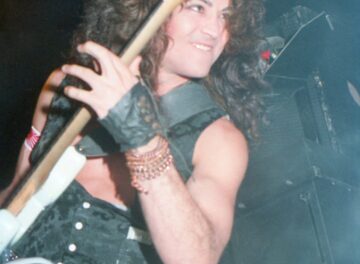 With respect to bassist Dana Strum (ex-Vinnie Vincent Invasion, Slaughter, Vince Neil solo band) who introduced him to guitarist Rhoads, Osbourne indicated: “He was the one who brought him. I’d never formed a band of people around me, and I’d never auditioned anyone. I didn’t know how to audition. I was in an apartment not far off the Santa Monica freeway, and 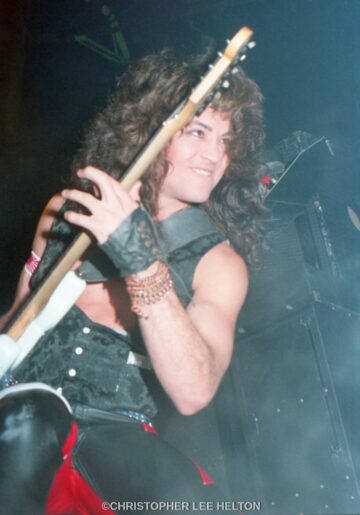 he brought Randy ’round when I was fuckin’ three sheets to the wind. I’d been drinking all day. And this little guy came in, and I thought he was a girl at first. He was such a tiny guy. I said, “Fucking hell. I’m done. I’ve had enough of this. I want to go home now.” I thought, it’s never gonna work, I’m going home. And Dana said, “Just see this one last guitar player.” I was fucked up. I said, “I want to go home. Bring him back tomorrow and I’ll see him.” And I was still fucked up the next day. I went to this studio, and I didn’t know where the fuck the studio was. Randy shows up with this little amp and a white Les Paul, and he says, “What do you want me to play?” I said, “Whatever the fuck, I don’t care.” So he started playing, and I was like, “What the fuck is this?” Even in my stupor. I put it to him this way: “I don’t know if you’re as good as I think you are, but I’ll see you tomorrow.” So the next day, when I was sober, he blew my fucking mind off. He just blew my mind. He was fucking unbelievable.”

Osbourne continued: “The one thing about Randy Rhoads that I’m forever grateful for, is he spent time with me. He didn’t sit in the recording booth and give me some melody to do over what he played, regardless of whether I could do it on stage or not. Then you’d get this stuff that you couldn’t do on stage. But he would say, “It would be better if you could sing it in this key,” you know. He was very patient.”

Saunders noted that Jake E. Lee and Gus G were incredible guitarists as well but didn’t get talked about quite often. Osbourne was asked what is it about him and having great guitarists by his side to which he replied:

In an interview with Ultimate Guitar posted back in October 2018, Lee was asked whether he was fired from Osbourne‘s band via a telegram to which he succinctly replied: “No.” When it was pointed out that’s what Wikipedia indicated, Lee added:

“No. I can honestly say I’ve never received a telegram in my life. [Laughs] I don’t even know how that works. Actually, I found out I was going… Sharon Osbourne asked me to go out to dinner with her and she wanted to talk to me about something.

“So we went out and it was a wonderful dinner – it was all on her, a beautiful, expensive dinner. And we chatted and then she said, ‘OK, let’s go back to the hotel, I still need to talk to you.’ I said, ‘Cool. Okay, whatever.’

“We went back to the hotel. We talked a little bit but nothing major, nothing important, just chit-chat really. And then I left and I went home. And my roommate, who was also my guitar tech, he came home and said, ‘Dude, how are you doing?’. I said, ‘I’m OK. Why?’ He said, ‘I just came back from the Rainbow and I saw Randy and Phil and they said you were getting fired tonight.’

“And I said, ‘What?! No. No way. I just talked to Sharon, I just went out to dinner with her. I think if I got fired, I would know about it.’ And he said, ‘No, that’s not what everybody in the Rainbow is talking about.’

On whether he was ever given a reason why, Lee told Ultimate Guitar: “No. Well, Ozzy called the next day to wish me luck. He said it was time for me to spread my wings and do my own thing. And that’s all he said. He didn’t say anything, he wished me the best. And that was that was the last time I talked to Ozzy, too.”

“I don’t know where that came from, but I figured out eventually that I think he got a lot of shit for firing me. Not necessarily from musicians or anything, but I think maybe from the record company. Because the record company doesn’t… you know, you have a big album like [1986’s] ‘Ultimate Sin‘ [Jake‘s second and final studio album with Ozzy], they don’t want to hear that you just fired the guitar player and songwriter.

“I think he got some grief about that, over firing me. So he had to come out and make it sound like that I just this horrible person to work with. It was kind of ugly there for a while, but I never said anything back. Because I didn’t have any bad blood towards him and I wasn’t going to get into a media war with Ozzy Osbourne, There’s no way I could win that.

“As far as I know, there wasn’t really any bad blood, but he made it look like it for a while.”