There has been a lot of ink written about the formidable debut line-up for Ozzy Osbourne‘s solo band which included Randy Rhoads on guitar, Bob Daisley on bass and Lee Kerslake on drums, and which played on the records Blizzard of Ozz (1980) and Diary of A Madman (1981). There has also been a lot of lawsuits with respect to the credits for those albums with Bob Daisley explaining in an interview with The Metal Voice how he and Kerslake ended up getting fired:

“The two albums Blizzard Of Ozz and Diary Of A Madman were done about 10 or 11 months of each other including a UK tour in between. We wrote the songs then we recorded the album. The first album was recorded and out before the contract was signed. Then when it came to write the second album Diary Of A Madman we said hang on a minute we haven’t got the money from the first album yet. Don Arden, the manager at the time, said on the phone to us don’t worry carry on the work and it will be all sorted out you will have your contract and money so we believed him and we carried on working. Then we recorded Diary Of A Madman and Lee Kerslake and I got fired. Ozzy wanted Tommy Aldridge in the band and Tommy was a friend of Sharon Arden‘s as well. During the UK tour, they kept pulling me a side saying ‘Let’s get rid of Lee. Let’s get Tommy.’ and I just didn’t think it was the right move. They asked me several times and I said no all the time, so eventually they got rid of me and Lee.”

Sadly, Kerslake passed away at the age of 73 earlier this morning after a long fight battle with cancer to which Osbourne made the following comment on his Facebook page earlier today: “It’s been 39 years since I’ve seen Lee but he lives for ever on the records he played on for me, Blizzard of Ozz and Diary of a Madman. Lee Kerslake RIP.”

In a separate interview with The Metal Voice back in December 2018, Kerslake revealed that he had made peace with Ozzy and Sharon Osbourne as he indicated: “Yes I have made peace. It’s all forgotten and forgiven. I’ve written to Sharon and Ozzy recently — a personal letter basically asking them to kindly send me a platinum album certifications for Blizzard of Ozz and/or Diary of a Madman to hang on my wall before I die. It’s on my bucket list. I really wrote a nice letter to them and I hope they will come to terms with it and say ‘Yes’. I went  belly-up bankrupt when I lost the case to Sharon and Ozzy Osbourne in the courts. It cost me hundreds of thousands and I had to sell the house and then started to get ill. I never managed to get back up but a platinum certification on my wall for these albums would be fantastic and it would say I help create those albums.”

The next month, Kerslake’s wish was granted as he received platinum certifications for the first two Ozzy albums from Osbourne himself. 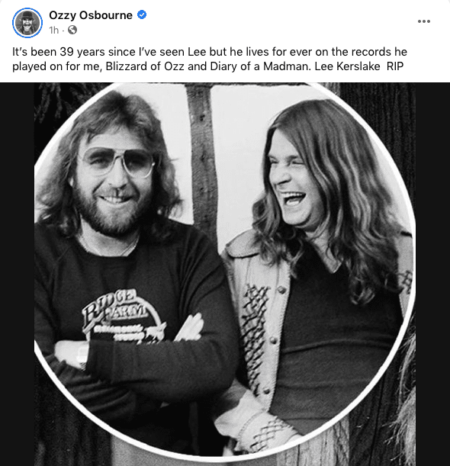