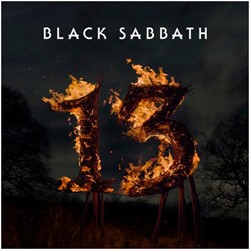 Reports have been circulating that Ozzy Osbourne and his wife of over 30 years Sharon are heading for divorce. However the Black Sabbath frontman has put the rumors to rest by stating, “Just to set the record straight, Sharon and I are not divorcing. I’m just trying to be a better person.”

“For the last year and a half I have been drinking and taking drugs,” says Osbourne, who has battled drug and alcohol addiction in the past. “I was in a very dark place and was an asshole to the people I love most, my family. However, I am happy to say that I am now 44 days sober. I would like to apologize to Sharon, my family, my friends and my band mates for my insane behavior during this period… and my fans.”

Last week Black Sabbath revealed the artwork and track listing for ’13’, the original band’s first new studio album in 35 years. In classic Sabbath fashion, the CD, due out June 11th, comes in at nearly sixty minutes in just eight songs. “God Is Dead?”, the first single from ’13’, will be released digitally on April 19th.

For the recording of ’13’, Black Sabbath — Ozzy Osbourne, guitarist Tony Iommi and bassist Geezer Butler — were joined by drummer Brad Wilk (Rage Against The Machine). Produced by Rick Rubin (seven-time Grammy winner, two of those as Producer of the Year), the album will be released on Vertigo (worldwide) and Vertigo/Republic in the U.S.

Black Sabbath have also announced four summer shows in North America in support of the release of ’13’. Tickets for the Live Nation-produced tour will go on sale Saturday, April 20 at LiveNation.com and Ticketmaster.com. The dates include stops in Holmdel, New Jersey (NY-area) on August 4th, Toronto, Ontario on August 14th, Seattle, Washington on August 24th and Los Angeles, California on September 3rd.