Black Sabbath frontman Ozzy Osbourne has released an animated video for his likely best known solo song “Crazy Train.” The animated video is no doubt to celebrate the upcoming 40th year anniversary of the release of Osbourne‘s debut solo album Blizzard of Ozz.

Wikipedia indicates the following about the production and reception of the classic track (with slight edits): 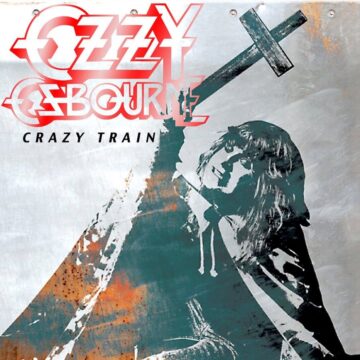 “Guitarist Greg Leon, who initially took Randy Rhoads‘ place in Quiet Riot, has claimed that he helped Rhoads write what would become the iconic “Crazy Train” riff. “We were hanging out, and I showed him the riff to Steve Miller‘s ‘Swingtown’. I said: ‘Look what happens when you speed this riff up’. We messed around, and the next thing I know he took it to a whole other level and end up writing the ‘Crazy Train’ riff.” Guitarist William Weaver has also claimed to have written the signature riff and then presented the music to Rhoads in a studio session that they had both been a part of.

AllMusic reviewer Steve Huey described the main guitar riff as “a classic, making use of the full minor scale in a way not seen since Ritchie Blackmore‘s heyday with Deep Purple.”

The song is one of Osbourne‘s best known and recognizable as a solo performer. It was rated 9th-greatest guitar solo ever by readers of Guitar World magazine. The song was also ranked ninth by VH1 on the list of the 40 Greatest Metal Songs and in 2009 it was named the 23rd-greatest hard rock song of all time also by VH1, the highest placement by a solo artist on the list.

The single reached No. 49 on the United Kingdom singles chart in 1980. In the United States, the song reached No. 9 on the Billboard Top Tracks chart and the single peaked at No. 6 on the Billboard Bubbling Under the Hot 100 chart in 1981. The master ringtone was certified double platinum and had by September 2010 sold 1,750,000 downloads. The Tribute re-release was accompanied by a music video.”