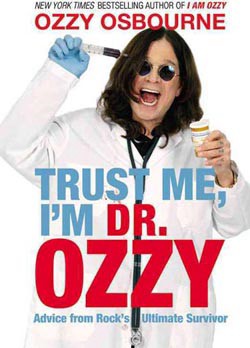 The book of Ozzy Osbourne’s popular healthcare advice column from the Sunday Times in London (and reprinted in Rolling Stone) has been given an October release date reports Gibson.com‘s Peter Hodgson.

Like the regular newspaper and magazine columns, the book, called Trust Me, I’m Dr. Ozzy — Advice from Rock’s Ultimate Survivor, sees Ozzy share his hard-won wisdom on a wide variety of topics. The book will also offer memoir-style survival stories never before published.

Ozzy’s advice is generally given in the form of an anecdote about misadventures in his younger days, but the columns also have included insight on how he coped when wife Sharon was diagnosed with cancer, and warnings against the risk of cocaine: “[it] puts a lot of stress on that little wotsit that hangs down at the back of your throat — the epiglottis, or the ‘clack,’ as I’ve always called it. In the mid-1970s, I was taking so much coke, I tore my clack in half.”

Ozzy told The Pulse of Radio in 2010 that the column would be written in collaboration with Chris Ayers, who co-wrote Ozzy’s I Am Ozzy autobiography. “He brings me the column things and I just joke about it, you know,” Ozzy said, “‘Cause if you believe me, you’ll end up in the lunatic asylum.”