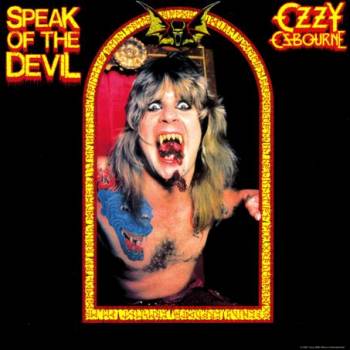 On July 17th, Eagle Rock Entertainment will release Ozzy Osbourne’s ‘Speak Of The Devil’ on DVD in North America.

This show was filmed at Irvine Meadows Amphitheater in California on June 12, 1982 as part of the delayed continuation of the ‘Diary Of A Madman’ tour following the tragic death of Randy Rhoads a few months earlier. The audio has been digitally restored and remastered and is now available in DTS and Dolby 5.1 Surround Sound for the first time. ‘Speak Of The Devil’ includes the classics “Mr. Crowley”, “Over The Mountain”, “Crazy Train”, “Flying High Again”, “Iron Man”, “Paranoid”, “Goodbye To Romance”, and many more.

The concert is a perfect snapshot of Ozzy Osbourne’s live performances in the eighties with dramatic staging and masses of energy with a setlist based around his first two solo albums and a few Black Sabbath classics. The line-up for this show features Ozzy Osbourne (vocals); Don Airey (keyboards); Tommy Aldridge (drums); Brad Gillis (guitar) and Rudy Sarzo (bass).

Ozzy has always been one of heavy metal’s great frontmen and, despite the difficult circumstances, the show presented on ‘Speak Of The Devil’ captures him at his absolute best.

Eagle Rock Entertainment is the largest producer and distributor of music programming for DVD, Blu-Ray, TV, Audio and Digital Media in the world. Eagle works directly alongside talent to produce top quality, High Definition and 3D programs, both concerts and documentaries, including The Rolling Stones, Pink Floyd, The Who, Queen, The Doors, Jeff Beck, U2, Peter Gabriel, Paul McCartney and Ozzy Osbourne. Eagle is a Grammy Award winning company and has received over 30 multi-platinum, over 50 platinum and over 90 gold discs, worldwide. Eagle Rock Entertainment has offices in London, New York, Toronto, Paris and Hamburg.