YESTERROCK: re-issues of PAGANINI’s classics “Weapon Of Love” and “It’s A Long Way To The Top” 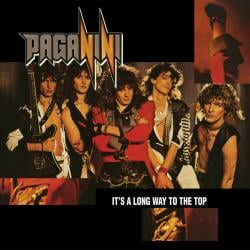 After leaving the German hard rock group VIVA, Swiss rock singer Marco Paganini founded his own band PAGANINI in the mid 80s. In 1985, the album “Weapon Of Love” was released, followed by “It’s A Long Way To The Top” in 1987. Both albums are much sought after by today’s collectors, selling at high prices on e-bay…if they can be found at all.

“Weapon Of Love” also contains the hit single “Berlin By Night”, which got heavy airplay at the time and also achieved cult status in many rock clubs. Back in the days PAGANINI were touring all over Europe, supporting – amongst many others – bands such as MOTLEY CRUE.

YESTERROCK, the Munich based label specializing in re-releasing classic rock albums, managed to put out the two albums, both of which were digitally remastered. Each CD also contains a bonus track. As usual, distribution is handled by NL DISTRIBUTION.