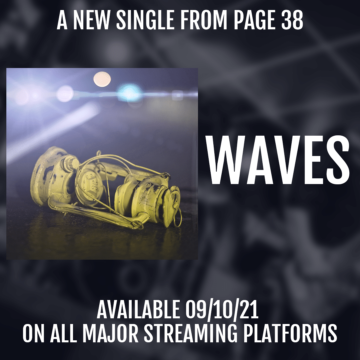 “Page 38 is a potent original hard rock band based in Thunder Bay, Ontario writing tough new songs that blend classic rock influences with 21st Century fire. Inspired by Metallica, Judas Priest, Black Stone Cherry, and The Wild!, the group goes all-out onstage and in the studio, bringing a high-quality concert experience to venues both large and small. Page 38 has released two EPs and a full-length record since first coming together in 2012 and will be back in the studio in March of 2020 to begin work on a new single. The band has also toured Western Canada and Southern Ontario in the last two years and is currently gearing up to get back on the road.

The present Page 38 lineup of Andy Hubbard on vocals and bass, Taylor Nicholl on drums, and Cameron Padovese and Jacob Goodman on guitars is the strongest the group has ever been and all involved are motivated to bring rock fans together with their music. Ultimately, they do this because it’s a damn good time and because each player believes in the sense of community that rock creates. Page 38 has drawn comparisons to Danko Jones, Helix, and Aerosmith but delivers its own take on loud guitar music that imitates no one. The band makes the kind of modern-yet-timeless rock and roll that has the potential to blow up around the world. Savvy fans will want to get onboard and be part of the explosion.”