Australian ’70s inspired rockers Palace of The King have just released a video for their latest single “Tell It Like It Is” which will be featured on their fourth full length album scheduled for release later this year. The video was created by OneHouse Productions and directed by Cameron Mitchell. 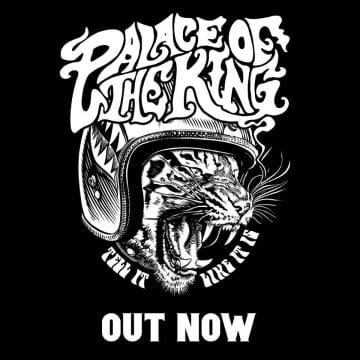 The band’s “Biography” on its Facebook page notes (with slight edits): “Formed in late 2012, Palace of The King – nameless at that point – quickly recorded a three-track demo and developed the vision of a blues-infused rock and roll band. Far from a grave-robbing retro trip, Palace of The King has just as much in common with Rival Sons, Graveyard and Jack White as they do Led Zeppelin, Black Sabbath and Deep Purple. Remember when bands released an album a year and toured ’til the wheels fell off the tour van?

Having spent their formative years storming stages in every corner of Australia – alongside bands as varied as Airbourne and The Tea Party – and priming themselves for an international assault, Palace of The King took their finely-honed live show through Europe in October 2015. Armed with two EPs, a full-length vinyl LP and a second full length studio album; this is a band that has earned their stripes and wear them with pride.

“Palace of The King is literally like a huge ground shaking Palace of Riffs, Soul and Rock’n’Roll.” comments Joel O’Keeffe, lead singer and guitarist of Airbourne. “With more hooks and lines than a hard working Bering Sea fishing fleet they are guaranteed to tangle you up, reel you in and blow you away with their unique six- stringing, soul singing, sexy stomping Rock’n’Roll! They are the real fuckin’ deal ! Crank up POTK!”

In 2015, it was time for the White Bird to take flight. From three minute funk-infused rockers through to seven minute Sabbath-esque crushers, Palace of The King seized the opportunity to explore every intricate corner of their influences and craft a debut album that caught a band at a point where ‘scratching the surface’ wasn’t nearly enough.

In 2016, the band unveiled Valles Marineris on 15th July 2016 (Europe/ UK). Valles Marineris deepened Palace of The King’s footprint on the international rock music scene by expanding on the “raw, energetic, imaginative and boundary-pushing” (Dedicated Rocker Society) qualities of their debut through an all-new 10 track collection of blues and psych-infused hard rock.

Led by the bruising gospel-tinged riffathon of ‘Let The Blood Run Free’, Valles Marineris is both eclectic and unrelenting right through to the final eerie piano fadeout of album closer ‘Into The Black’. In support of the Valles Marineris album, POTK toured constantly throughout 2016/17 covering Europe as headliners and as guest with Airbourne, hitting America for the second time and multiple laps of Auatralia as headline act and also as guests with The Angels, Baby Animals and the Screaming Jets.

In classic road dog style, the band recorded at every opportunity when they were off the road and they have captured the raw energy of the stage on the new album Get Right With Your Maker. From the moment the epic album opener ‘I Am The Storm’ envelopes you, it’s hard not to think that this is the sound of a band that has come of age, and once the fist pumping anthem ‘It’s Been A Long Time Coming’ hits you in the face, you know it. The ‘freight train’ metaphor may be overused. But you’d be hard-pressed to find one that is better-suited to a band that has played constantly, released a mountain of music and expanded their markets at such a prolific rate. With extensive tour dates in Australia, USA and Europe, 2016/17 has been Palace of The King’s most productive year to date.”

Palace of The King‘s “Tell It Like It Is” video:

Palace Of The King – Tell It Like It Is

Tell It Like it Is.The new single from – Palace Of The King.Produced by – Tim Henwood (Palace of The King)Mixed by – Jonathan Burnside (Clutch, Fu Manchu, Ni…