UK sleaze rockers Paradise Alley are looking to replace their lead guitarist Paul Thake as the group has big plans including doing a re-release of their album Psychotic Playground for its 25th year anniversary.

The following message was posted on Paradise Alley‘s Facebook page on October 1, 2018: 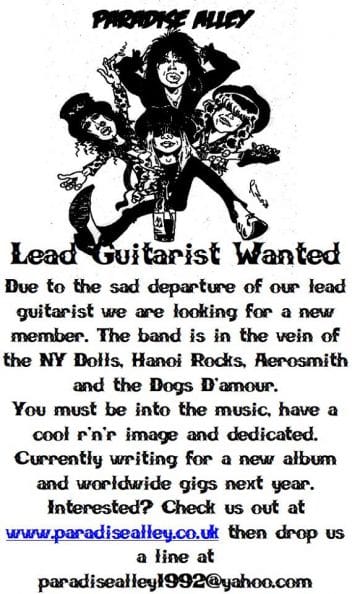 “Yeah, we know, its only been two days but this is pretty important as we have LOTS coming up! And before you ask, there is no wage, there is no major record label behind us bankrolling our every move, it’s just us, doing all of this for the love of rock’n’roll…if the description below sounds like you, drop us a line”

Back in September 2018, Paradise Alley guitarist Paul Thake announced his departure from the band via the group’s Facebook page:

“Hi everyone, it’s Paul here. It’s with a heavy heart that I am writing this but after talking it through with the rest of the band thought it was best to be straight with everyone.

I love Paradise Alley and the last few months have been a blast, but life away from the band has been pretty crazy and I have struggled to balance everything. I’ve now reached a point where I don’t feel I can give the band the 100% needed, especially with the new album and shows next year and rather than try and keep spinning plates only to “drop them”, it’s better if I step down as guitarist now and let Steve, Ben and Taj carry things forward with new members. I wish them nothing but the best, the new songs and the shows are going to be amazing. To whoever steps into my shoes, I send you good vibes, you’ll have a blast, just hang on tight!

“A few months after moving to London full-time in early 1992, ex-Indian Angel frontman Steve Vincent decided that it was time to start his own band after an unhappy and short-lived period with Scarlet Tears. The first thing Steve did was come up with the name for his plan, Paradise Alley which he saw in a TV Guide (yes it is the old Stallone movie!). Then he placed an ad in the music press looking for like-minded comrades and waited.

First to get in touch was drummer Richard Hale and he and Vincent soon became firm friends and it was round the two of them that the band started to take shape. Inspired by the likes of Hanoi Rocks, The Ramones, The Dogs D’amour, The Throbs and the New York Dolls. Their aim was simple, to play sleazy rock’n’roll and have a good time, ALL the time!

Despite several early line-up changes, the band still managed to record a demo which included their own take on Hanoi’s “Shakes”. From there, the band soon rose to the forefront of the London Rock Scene and ended 1993 with the release of their first album, “Psychotic Playground” which featured cover art by legendary Kerrang! scribe Ray Zell and included future classics, “Metropolis Boys”, “Baby Don’t Go” and “Shotdown”.

As the band’s wild reputation grew and the major labels started to take notice, drugs, booze, police arrests and having a good time took over from making music. After a showcase at The Marquee, it looked like the end with all the members going their separate ways. 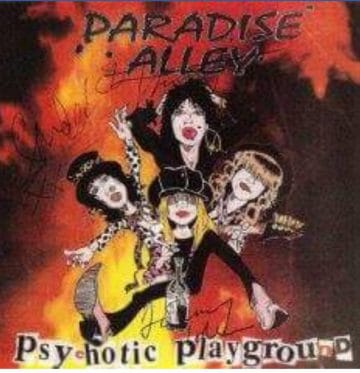 But Steve V. bounced back with a new line-up, a slight change in direction which was more Sunset Strip than Wardour Street, introduced good friends The 69 Eyes to UK audiences with their first British Tour and the eventual release of their second album, “Heartbreakers & Homewreckers”. But by the time of it’s release at a comeback show in London, history looked set to repeat itself. Steve hankered after a return to more rock’n ‘roll roots while the rest of the band hankered after nothing more than being a pub rock covers band. It was time for a fresh start.

Step forward one of Steve’s friends from Scotland, Kenny Reid and a new partner in misadventure on drums, Steve Thompson. Soon joined by Taj Sagoo and Mark Perry-Harkin, it wasn’t long before Paradise Alley were back at the top of their game and once more taking London by storm. Then came a club tour of the USA which included a headline show at CBGBs and an exclusive Playboy Party in Hell’s Kitchen, New York. As the tour wound down, the band set up camp in Alabama at their label Delinquent’s studios, to start work on a third album.

With five tracks done, they returned to London for Xmas, but after seven years of sex, drugs and rock’n’roll, the band decided it was time to stop, and so the story ended…or did it?

Because when the sex drugs and Rock n’ Roll won’t go away, what do you do?

You keep the band together and change the name. Neon Bomb took on the London scene in true Paradise Alley fashion and when that wasn’t enough headed to LA to kick up another storm. Gigs at the Whiskey and Taime Downe’s Pretty Ugly Club cemented the bands reputation as a bunch of mother f***ing rock n’ rollers. Their debut EP featured future classics “Believe” and “Looking At You” (which had originally been worked up with a view to recording for the 3rd PA album) whilst the live set included Paradise Alley track “Didn’t You Used to Be Somebody”, a song which was to become the band’s ironic tribute to themselves.

Somewhere along the lines they lost skin thumper Stevie T and Kenny wandered off into the sunset to make way for another guitar hero. The band slowly lost it’s way and eventually self imploded, a cheap parody of what had once been.

While Steve continued under the Neon Bomb name, the other four kept going under the name of Trash. Eventually the five were reunited on stage at the Borderline in front of a packed house two weeks in a row but it still wasn’t enough. As Neon Bomb finally fizzled out, Mr Vincent decamped to Los Angeles for a fresh start but within a year was back in London. The offer then came in to open for Hanoi Rocks at their first London show in 18 years. The problem? There was no band and relations were strained, but somehow Taj managed to broker a peace and the last line up of Paradise Alley reconvened for the Hanoi show. It was however, just a one off.

A new band was put together by Steve (Vincent) for 2003, The X-iDolls but after touring with Faster Pussycat, Tuuli and The Quireboys and recording an album, the band quickly folded.

There were various dalliances in the intervening years with bands but little of significance, but then fate took control. Following the sad passing in 2012 of Richie Hale and several late night conversations with Jyrki from The 69 Eyes, the seed was sown. Early 2013, Steve V., Kenny, Taj, Mark and Steve T., sat down and agreed the time was right to bring Paradise Alley back. And they did! After a slow start which saw Mark eventually drop out due to other commitments, the band carried on and after making the cover CD on Vive Le Rock magazine, the live shows started in earnest. As things progressed the line up became fluid with a revolving door of members and by 2015 after blowing the doors off another London venue, the band went their separate ways without a word of goodbye and then…silence.

But that’s not what Paradise Alley are about is it? So here we are, as 2017 draws to a close and Steve Vincent and Taj are putting a new line up together, looking forward this time and not backwards, this isn’t about nostalgia, this is rock’n’roll!

Paradise Alley‘s “Didn’t You Used To Be Somebody” song:

Didnt You Used To Be Somebody – PARADISE ALLEY