Ariel Bellvalaire, who plays guitar in the all female Guns N’ Roses tribute band Paradise Kitty, has released a video for her single “Elastic.”

Bellvalaire‘s Biography on her website indicates (with slight edits): 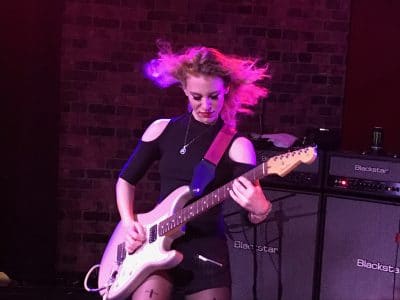 “From the quiet town of Windsor, Connecticut, Pop Rock singer and lead shred guitarist Ariel Bellvalaire is catching the attention of music lovers around the globe. Her fans describe her songs as “Avril Lavigne with a hint of Van Halen.”

In a world dominated by pop music, Ariel stands out by adding her own punk- rock twist and of course her signature guitar solos to her original music. In 2014, Ariel had her Broadway debut by playing guitar on stage alongside Tony winner’s Lena Hall and Robin Dejesus in the “Dearly Beloved Prince Tribute show in New York City. Shortly after moving to Los Angeles in 2015, Ariel booked lead roles playing guitar in commercials such as GMC and was the face of KIA‘s iconic national 2016 campaign appearing as the electric guitar playing hamster. Shortly after, Ariel hit the road touring Asia and Europe as lead guitarist and singer for Nik West.

Currently, Ariel is working on a brand new EP of all original music in Nashville featuring guitar driven songs that will be released this year. In addition to her own music and shows, Ariel can be seen playing guitar as well as doing aerial acrobatics on stage with the all female movement “Femmology” which consists of a full female cast of musicians, dancers and aerialists all coming together to put on an over the top show debuting in October of 2017 in Las Vegas.

Ariel consistently inspires audience members with her live high- energy performances, singing, and her fast “shred” style electric guitar solos and is excited to debut her aerial acrobatics on stage. She plans on touring the U.S and Europe both as a solo artist and with Femmology in hopes of sharing her love of lead electric guitar.”

Sleaze Roxx caught Paradise Kitty in concert in Rochester, New York, USA back in late July 2018 and commented about Bellvalaire‘s live performance in its review: “I must say that diminutive lead guitarist Ariel Bellvalaire was very impressive. She handled most of the guitar solos, moved around quite a bit, sported a big smile highlighted by her red lipstick and even did the splits while playing a portion of her guitar solo during “Paradise City.””