XYZ founder and bassist Pat Fontaine was recently interviewed by Mark Rockpit for The Rockpit in advance of MelodicRock Fest, which will be taking place in Melbourne, Australia on March 6 to 8, 2020.

Mark Rockpit noted that XYZ‘s story was an interesting one with a bunch of guys moving from France to LA to make their dreams happen. 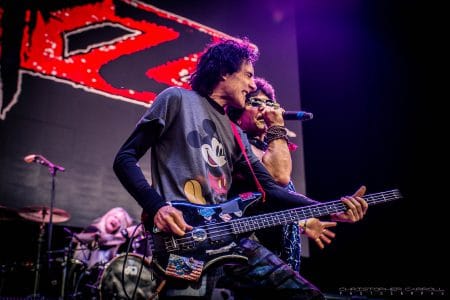 Fontaine indicated: “Well I believe my first XYZ rehearsal was just me, and that was in 1980!! I just always wanted to do a trio thing, because of Motorhead; I was a big fan of Motorhead. So, I bought a 4001 Rickenbacker just like Lemmy had, and then I recruited a guitar player and a drummer eventually, and then we were XYZ, a trio. One day we were in the studio doing a demo, and my manager at the time said there’s this guy, Terry, who’s a really good singer who just wants to swing by and check it out. At that time we had a bit of a name in our home town and Terry was curious about it, why is it, that this trio of punks have managed to get a little bit of a name here, so he came by and we were singing, I was singing, so I said ok, you have a great voice do you want to do something a little bit different and step behind the mic and just do anything you want, and he did! We all kind of thought, OK, it’s going to mess the trio thing up, but he had such a great voice, he was so good at it he never missed a note, and what he did that day, there was no preparation, no rehearsal, he just sang, and we were stood in the control room thinking, shit, that’s actually pretty good!!!

So, we recorded the song and that was it, we didn’t think twice about it, and I thought we’ll carry on as a trio, and I’ll keep the demo as a souvenir.  I would then play the demo to people and they would say “Oh my God!” your singer is fantastic, and I would say he’s not my singer he’s just a friend of mine, and eventually everybody just said the same thing, forget the trio thing, you’ve got to get that singer! So, I called Terry again, and he was against it at first, we were very heavy at first and he didn’t want to go heavy, he wanted to be more melodic, and so eventually we decided to meet half way, we would let go of the Punk heaviness, and we’ll meet him half way with a melodic pop sound, and we joined forces in 1983, and very quickly I said, Terry if we’re going to do something, let’s do it big. So, if you’re serious and you want to do this then let’s go where it’s happening, and at that time, California was where it was happening, and we thought we’ve got to get there, so we did, we got on a plane with nothing in our pockets, and landed in Los Angeles at the end of 1983, a little bit before the Olympics, if I remember. The two guys who were with us at the time thought we had no chance in hell, they didn’t want to do the LA experiment, so it was just Terry and I, and eventually we recruited a few guys here and there, on the Strip, walking Sunset Boulevard on a Saturday night, all the bands were out there, Quiet Riot, Warrant, Guns n Roses, Poison, all those guys were there and we just wanted to be part of it.

Eventually, a gig at a time we managed to put our name on the Marquee at the Whiskey, and we became the Whisky band, and in 1986 we were signed to Atlantic records. We were so excited, but eventually that deal didn’t make it, so the record we recorded for Atlantic, was to them, not “Heavy” enough. We shelved it, and continued on for a couple of years, and then with Enigma/Capitol that was in 1989 and that was the story of the pre signed XYZ. After that we got a deal, when you’ve got a deal things kind of get a bit bigger in a quick period, a lot of it is a bit out of control, because now you’re losing control and you give it to the record label! So from first rehearsal in France in 1980 to a major corporation deal in California in 1989 that was it!!”

You can read the rest of the interview with Pat Fontaine at The Rockpit‘s website.