Track List for Rest In Pieces: A Tribute To The Departed: 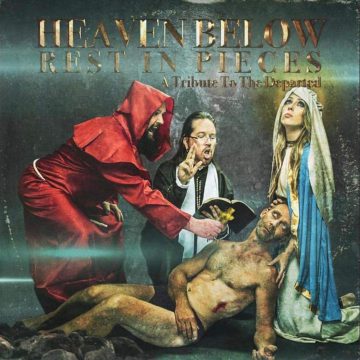 Kennison was asked how Heaven Below ended up getting a special guest to do a spoken piece on the band’s cover of Rush‘s classic track “Subdivisions.” Kennison replied (with slight edits):

“What a great story. I’m blessed that I get to do studio work, there’s some great artists living out here in LA. A good friend of mine produced a cover record by William Shatner. My friend called me in to help lay down the guitar tracks and a guide vocal so that William would know where the vocal would go. So I went in, I did it, he liked it and then I got a call back asking me to come in to lay down some background vocals. By the time it’s all said and done, I’m all over Shatner‘s record. So, I see William in passing as we wrapped things up and he says to me, “Patrick, if you ever need a favor, don’t hesitate to call.” I was like, ”Wow! That’s really sweet of him”. So a few months later we’re talking about covering “Subdivisions” and I’m like, “Well, yeah, but who is going to cover the spoken part”? No sooner did I say that, it came to me: I could call William Shatner! Within an hour I had William Shatner ready to do the spoken word part on “Subdivisions”.

You can read the rest of the interview with Patrick Kennison and Nikki Stringfield by Ruben Mosqueda at KNAC‘s website.