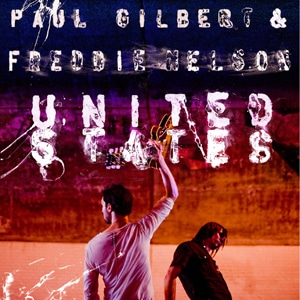 UNITED STATES is the first collaboration of Paul Gilbert and Freddie Nelson. The album features 10 new songs which they wrote, performed, and produced together in the summer of 2008. UNITED STATES will be released May 12th, 2009 on Mascot Records U.S.A. (www.mascotrecordsusa.com).

Gilbert and Nelson share many musical and cultural roots. Both artists grew up outside of Pittsburgh, Pennsylvania. Both were born the same year and started playing guitar around the same time. Both played in Pittsburgh bands, and even shared some of the same band members.

Gilbert moved to Los Angeles, and Nelson stayed in Pittsburgh, so they never met until now.

On first listen, Nelson’s stunning vocals reminds many listeners of the legendary Freddie Mercury. But listen again, and you will be introduced to a singer, performer, and writer with a unique sound and character all his own.

Gilbert could easily rest on his “Guitar Hero” reputation, but being raised on The Beatles, The Who, Led Zeppelin, and Van Halen, Gilbert craves great rock singing and songs.

Paul Gilbert began his career with the legendary shred-metal band RACER X in 1986. Since then, his guitar playing has brought him number one hits with the band MR. BIG, and a devoted following of guitar and music lovers all over the world. Gilbert’s recent foray into instrumental guitar music brought him even more attention, and has resulted in extensive touring with Joe Satriani’s “G3” tour in North America and over 100 shows as a headliner in Europe, Japan, and South America.

UNITED STATES is one Paul Gilbert album you must add to your collection.