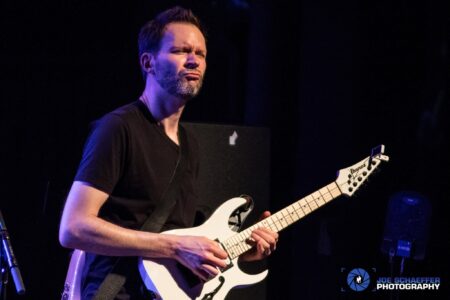 Montalbano asked Gilbert who were some of the favorite artists that he’s gotten to play with to which the guitarist replied: “Yeah, that’s been wonderful. With Mr. Big, we started opening up for bigger bands. We opened up for Rush, which was huge. We opened up for Bryan Adams, Aerosmith, and Scorpions. Let’s see…one of my favorites is Cheap Trick, they would let me sit in on the encore, and let me play with them a little bit. I think it was like the fourth time ’cause they tour a lot. So, they called and said “We’re coming through town again,” and I said, “This time, instead of playing guitar can I play the drums?” And they let me. I love playing drums as a hobbyist. I played drums on my last Werewolves of Portland album, but they let me do it, and to play drums with Cheap Trick, was one of the most fun amazing experiences I ever had.

And that was actually something I had to do with Mr. Big, we used to switch instruments at the end of the night, and I was probably the most accomplished drummer besides the drummer. So, I’d be the drummer. Those are big shows, to play drums, like in an arena and you really you got some responsibility, you gotta keep a certain amount of physical stamina, and I’m not muscly, I’m not in shape. I’ve never really been an exerciser, so when I was younger, it was fairly easy ’cause you’re young, you’re strong, but I remember the last couple tours I was getting my late 40s and 50s, I’m going, “I don’t know if I’m gonna make it to the end.” So, it was interesting to play an instrument that’s much more physically demanding versus the guitar. There’s a famous Dire Straits lyric, “Maybe get a blister on your little finger,” that’s about what it is you do, you don’t have to really work in terms of the physical part of it, but drums is a whole other deal.”

You can read the rest of the interview with Paul Gilbert at Vinyl Writer Music‘s website.