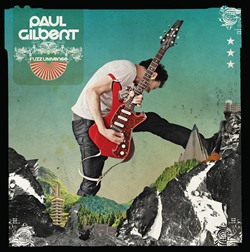 Paul Gilbert unleashes his 3rd instrumental masterpiece on Shrapnel Records, August 3rd to the world. “FUZZ UNIVERSE is my third guitar instrumental album,” explains Gilbert. “Being a fan of pop music and rock bands, I am a reluctant convert into the art of instrumental rock music. But after touring with Joe Satriani’s G3, I witnessed firsthand the power of the electric guitar to take center stage and rock the audience. Playing my guitar-driven songs live was a blast! This discovery led to a huge increase in my touring as a solo artist. In the last couple of years, I’ve played nearly 150 shows all over the world, with my guitar leading the way.”

FUZZ UNIVERSE title is inspired by Gilbert being so immersed in the world of guitar it made him realize that he lives in a FUZZ UNIVERSE. “Every generation of guitar players has their own terminology for the rock guitar sound: Distortion, Overdrive, Gain, Crunch, Saturation, Drive etc. For me, the word is FUZZ”

Gilbert’s extraordinary talent of arranging/composing lends to the new music’s fresh melodies for songs that shows his true diversity and only in Gilberts words will you understand:

“On FUZZ UNIVERSE, I think I’ve taken a giant step closer to the ultimate rock guitar sound and playing of my dreams. I’ve used many of my signature techniques from RACER X and MR. BIG, but twisted them into new chords, grooves, and emotions.

As always, my influences are diverse and not what you might expect from a “heavy metal” artist. While I was writing the songs for FUZZ UNIVERSE, I was immersing myself in Bulgarian Female Choir music, Baroque lute and violin pieces, Johnny Cash songs about trains, cows, mules, and mining coal, the Bee Gees, and Ronnie James Dio. I mix all this into my head, and out came endless new ideas for my guitar to chew on.

After several months of being locked in my writing room, I gathered my touring band together and headed to the studio. Jeff Bowders played drums. Craig Martini played bass. Emi Gilbert (my wife) played keyboards. And I bent the guitar strings until I couldn’t play anymore.

As usual, there are no dramatic stories here. No heroin overdoses, motorcycle accidents, celebrity divorces, or band-member boxing matches. The emotion, drama, and power are all in the music. That is the universe that I want to live in”

Paul Gilbert is regarded internationally as one of the greatest players in the industry. Starting his recording career with Shrapnel Records as a teenager in the late 80’s, Gilbert remains one of the most active guitarists from the original shred guitar scene. His rise to Platinum success includes a number one song with Mister Big, and cult status as founding member of the legendary and highly successful underground progressive metal band Racer X.