Former Danger Danger and current The Defiants lead vocalist Paul Laine was interviewed by Hall Laurel for the book Soundtrack of Our Youth: History of Hair Metal Music, which was recently released and is available in Kindle and paperback formats. 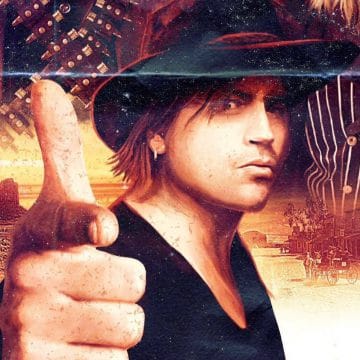 When Laine was asked whether The Defiants wanted to break away from the Danger Danger sound with their self-titled debut album, which reached the #2 spot on the Sleaze Roxx Readers’ Top 20 Albums of 2016, the singer’s reply included a jab at bands that previously released great albums but are now enlisting outside writers to write their new records as he advised:

“Bruno and I wrote the record truly believing nobody would really care about it. We just wrote for ourselves and had fun with the process. With no expectations, there are no limits. I feel that it is so important to approach every record that you make with your absolute best that you can do in that moment.

The Defiants was a chance for Bruno and I to work together on our own, without having anybody look over our shoulder, and with no preconceived idea of what the record would be. I’m so tired of all of these bands now, that used to have great records, accepting a new record deal and then letting other writers write the record for them because a) they’re too lazy, b) too frightened that they can’t come up with the goods anymore (in my opinion you should just hang up your career then…) and c) most importantly…you are ripping off your fans when you do this. And you fuck with their own great legacy, by leaving that last thing you did in your career, the worst thing. Please stop doing this.”

In terms of any cool stories about his time in Danger Danger, Laine offered (with slight edits): “Every time I made a Danger Danger album, I always felt like it was going to be my last. You have to remember, we existed during that whole grunge era and boy band era. Weird times for all of us. The songs I wrote during those years were always meant to be for a new band that I was going to start. And then Danger Danger would get another record deal and I would hand over my songs like “Six Million Dollar Man”… and then start all over writing another album project for myself. Rinse Lather Repeat. My studio memories with Danger Danger were always good…time always ages things into a better story , doesn’t it?”