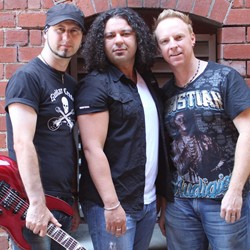 Australian melodic rockers The Radio Sun have announced that Paul Laine (solo artist, ex-Danger Danger, Dark Horse) will produce the band’s debut album. Laine is best known for replacing Ted Poley in Danger Danger and appearing on such albums as ‘Dawn’, ‘Four The Hard Way’, ‘The Return Of The Great Gildersleeves’ and ‘Cockroach’.

Guitarist Stevie Janevski goes on to say, “it’s been great working with Paul — an all round great guy who gets what we’re about. We can’t wait for everyone to hear this album!”

The Radio Sun will showcase their new material at the upcoming Melodic Rock Fest 3 by playing an acoustic set on the Friday and an electric set on the Saturday and look to have their debut album out in mid/late 2013.

The Radio Sun are a new melodic rock band from Melbourne, Australia that formed in 2012 and features lead vocalist Jason Old, guitarist Steve Janevski and drummer Ben Wignall formally from the melodic rock band Square One. With influences ranging from Mr. Big, Harem Scarem, Rick Springfield, Nelson and Firehouse, the band looks to help fly the flag for melodic rock — with a good dose of rokken guitars, big harmonies and loads of hooks.

More information can be found at www.facebook.com/theradiosun.