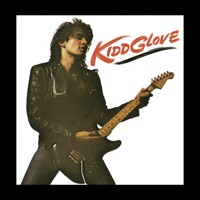 Yesterrock Records have reissued Kidd Glove’s self-titled release, complete with bonus tracks. The CD is now available for purchase at www.yesterrock.com and www.yesterrock-shop.com.

It all started when Motown decided to add a Rock Division to their company. Getting signed to Motown Records at 22 was quite an experience in itself. A guy by the name of Steve Barri was, at that time, the head of A&R at Motown and also the designated producer for this undertaking. They held a huge audition in L.A. which literally consisted of hundreds of contestants to find the perfect “Rock Dude” so I joined the crowds of rock artists that were auditioning and somehow won. I hadn’t researched it much before the audition and remember asking myself, “I wonder what I won.” The answer was forthcoming and I was immediately paired up with a couple of Motown staff writers to begin writing the Kidd Glove album. It was recorded a couple of months later and released with great anticipation and attained great success.

As a special bonus this re-issue also includes the first video from that album called “Good Clean Fun.”Furthermore included are a few bonus tracks from a film called “The Babysitters”. Another bonus song included is the song Paul Sabu wrote about his son titled “Viking Boy.” which has never been released before.