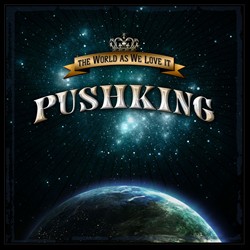 Paul Stanley, Alice Cooper And More Guest On Pushking’s ‘The World As We Love It’

Eagle Rock Entertainment will deliver to the masses Russia’s premiere rock band Pushking. Their CD The World As We Love It will hit the shelves on February 1.

Formed in 1994, Pushking is the culmination of vocalist/main songwriter Konstantin “Koha” Shustarev, guitarists Nikolai Yegerev and Dmitry Losev, bassist Valeriy Sadakov, keyboardist Vicktor Drobysh, and drummer Andrey Kruglov. The chemistry within this band has resulted in a potent brand of rock music, which has preserved through their 15-year career and only gets better. “..,It was a gas singin’ on their record”, states Glenn Hughes “…take it from me, it’s the real deal!!”