KISS frontman Paul Stanley has worn some rather feminine outfits over the years but the singer apparently draws the line when it comes to wearing dresses.

Stanley‘s long-time bandmate Gene Simmons recently tweeted a photo of the original KISS band members without make up that also included guitarist Ace Frehley and drummer Peter Criss along with their original manager J.R. Smalling (who recently passed away).

The photo appears to show Stanley wearing a pale blue / green dress but the singer retweeted the photo back on June 25, 2020 with the following comments:

“It’s not a dress but WOW anyway! What an outfit! I HAVE to laugh. It’s some sort of long shirt over my jeans but… WOW!!!!” 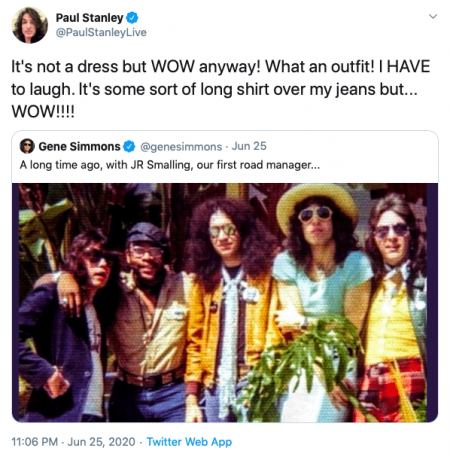