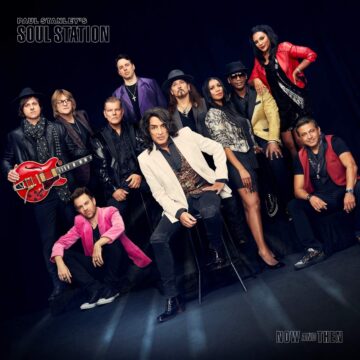 In terms of his KISS bandmate Eric Singer handling the drums in Soul Station, Stanley indicated (with slight edits): “With Eric, it would have been ridiculous if we just said, “Hey, let’s go get so-and-so. This metal drummer or this hard rock drummer.” Eric’s played in big bands with his dad and the depth of what he’s capable of doing is amazing. And he’s a great singer, so he even gets to sing some on the album.”

With respect to the other Soul Station band members, Stanley stated: “Well, you know, it’s humbling for me. It really was just that the planets just lined up. There were no auditions or anything; it’s crazy because most of these people have never played together and it’s really like a family. Everybody comes over to my house; we love hanging out. If you watch the videos, you see the band’s just having a ball early on. It started with Eric and I and Rafael, the guitar player who’s played on that Rock Star TV show. I don’t know, maybe that was eight or nine years ago. He has also played with Pink. He’s a phenomenal player. So, he was in the original version of the band, as was Crystal. And from there, I would start saying, “Hey, do you know anybody who, you know, might be able to do this or that?” Actually, Sean Hurley, bass player, who really plays phenomenally, very much in the realm of James Jamerson, who played on most of the big Motown songs, he played on a couple of tracks on Live To Win, my second solo album. And I just called Sean because he had been out with John Mayer, and I said, “Are you interested in, you know, this music?” He said, “Are you kidding? That’s what I love doing.” So, Sean came on board and somehow the percussionist Ray Yslas, who’s played with everybody, joined the sessions, and this past year, he was out on tour with Chicago, playing for them.

Then at some point, we needed a musical director. I certainly have my hands in all of that, but I like to have somebody who really has the technical know-how to interpret either what I’m saying or put it across to the band. So, Alex Alessandroni, who’s our musical director, was musical director for Natalie Cole, for Whitney Houston, for Christina Aguilera, and for Pink. Our lead trumpet player [Jon Pappenbrook] has played with everybody, but also goes back to having played with Sinatra and Buddy Rich. So, it’s a really amazing group of people and it just fell together. It’s the weirdest thing. It really was. It wasn’t, oh, we’ll take this person because we can’t get this person. It just fell together and we just have a ball.”

You can read the rest of the interview with Paul Stanley at Vinyl Writer Music‘s website.

Paul Stanley’s Soul Station‘s “I, Oh I” video (from Now And Then album):