KISS‘ frontman Paul Stanley was recently interviewed by Billboard where the discussion centered around merchandising. KISS recently reached 125 global licences to which Stanley stated: “We’ve had thousands of licensing partners over the years but my objective has never been to have bragging rights by accumulating volumes of licensing partners; rather, it’s been about using decades of successes as a spring board to elevate our position in terms of gaining higher stature affiliations.” 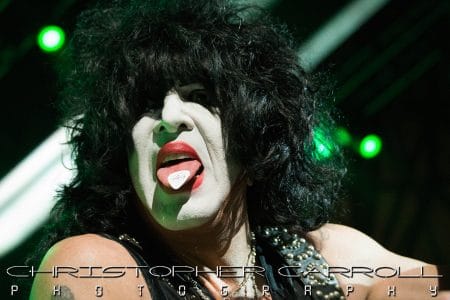 Stanley was asked whether KISS‘ revenues are as much as they have ever been to which he replied: “More, more. What people perceive as the pinnacle of the band tends to be the mid-1970s when we first came on the scene. In terms of our impact and in terms of monetary compensation, nothing compares today.”

In terms of who drafted the KISS logo, Stanley stated: “The initial design was done by Ace [Frehley] but the one that to this day appears on everything was actually drafted by me. I did it on my parents coffee table with a ruler and a piece of white oak tag–a kind of poster board. The two S’s are not actually parallel to each other because I did it by eye. When we got our record deal we were asked if we wanted to have the logo straightened and I said, “It got us this far, leave it alone.””

In regard to where else does KISS‘ revenues come from, Stanley stated: “It’s all of it. It’s all become much more refined and it’s become business in every sense as well it should because you want to maximize your earning potential. When we played Anaheim Stadium in 1977 tickets were probably six or eight dollars. I grew up in an era where I’d go to the Fillmore East to see Jimi Hendrix, Led Zeppelin, the Who or all these fabulous bands for $3.00.” With respect to VIP packages, Stanley opined: “We pretty much invented the VIP package. It’s a way for those who are in a position to get to experience something others don’t get a chance to. When you take part in a platinum package we make sure it’s a memorable event. You get to hear us play acoustic for a maximum of 75 people usually in the late-afternoon. Then we sign things, take photos before the show and you’re guaranteed seating in the first rows — it’s something unique. If you can give somebody something and they thank you after they’ve paid you, you’ve done your job.”

Stanley was also asked about any original member reunion possibilities to which he replied: “No. And that’s not coming from any place of animosity. I sang on Ace‘s most recent album and did a video with him. I have the connection and the reconnection and to celebrate the good things we’ve done together is terrific. The band as it is—I’ve played with Eric Singer for I think 25 years and Tommy‘s [Thayer] been in the band probably 15 years at this point. I have no thoughts of re-visiting the past. With that said I am happy to enhance or do whatever i can for anyone who has helped put me where I am, but that doesn’t include getting hitched again to somebody I unhitched from.”

You can read the rest of the interview at Billboard.