KISS bassist, singer and co-founder Gene Simmons‘ bandmate Paul Stanley is apparently rectifying a potential media faux pas by publicly declaring on Twitter yesterday that he is trying to figure out when he can join Simmons at an upcoming The Vault event.

Stanley‘s Twitter comments (see below) come as Simmons told as follows to a New York City crowd at a Vault event on March 25, 2018:

“Strange, strange for a band that never really played the singles game. You know, we had a disco hit and a ballad but not many. We didn’t really play the game. We just wanted to do what we wanted to do. So along the way, some of our friends and family members came by to say hello to wonderful folks like you. Ace [Frehley] has been to three of these Vault events — Los Angeles and a few others. Ace by the way is going to be opening for the Gene Simmons Band when we do five shows in Australia. He’s going to be using my back up band and we’re just going to have a great time. He’ll play “Ozone” and lots of other crazy stuff. And Peter Criss came by yesterday in case that you didn’t hear. Vinnie Vincent is going to be in Nashville. Paul Stanley — I can’t get him to come out yet but we’ll see. Maybe I’ll get him some paint brushes [to a room of laughter]. The thing we do is tease each other. Tommy [Thayer] and Eric [Singer have] been to Los Angeles. Bruce Kulick‘s been out. Of course, he likes to come out anywhere. It’s true [laughs].” 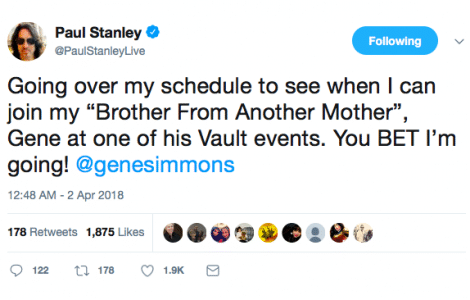