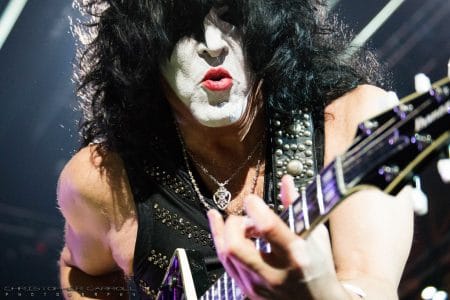 Although KISS have not readily admitted it, it’s been no secret that frontman Paul Stanley has been using pre-recorded backing vocals for his vocal performances during the group’s End of The Road World Tour.

For the most part, Stanley has been able to pull off these performances without a hitch but during KISS‘ recent performance at the Sportpaleis in Merksem, Belgium on June 6, 2022, the singer can be clearly seen not singing in a microphone while his vocals can be heard during a small segment towards the end of the song “Detroit Rock City.”

Unfortunately for Stanley, his voice seems to have gotten worse over the last decade. Sleaze Roxx noted as follows in its review of one of KISS‘ Las Vegas residency shows back in the fall of 2014: “There has been a lot of talk over the last few years that Paul Stanley‘s voice is not as good as it once was, but I thought that he sang really well on the opening night of KISS‘ Las Vegas residency. The only noticeable change was that he sang the verses of “I Was Made For Loving You” in a much lower register than what is heard on ‘Dynasty’. However, Stanley did hit all the high notes right before Tommy Thayer‘s guitar solo during that song.”

In terms of Stanley‘s use of backing tracks during the End of The Road World Tour, Sleaze Roxx noted in its review of KISS‘ Buffalo concert in February 2020: “As far as Stanley‘s singing, well, he wasn’t really singing since he strongly appeared to be using tracks once again. I am over it and frankly, prefer that to having Stanley butcher some KISS classics like he did back when my wife and I saw the band play live during its Las Vegas residency in November 2014.”