As the title surmises, after a two year hiatus following the passing in June of 2019 of René de Bie, multi-instrumentalist, songwriter and half of the power duo Pavement Princess, Erwin Arbon has painstakingly completed the band’s second and final release entitled Second Skin. 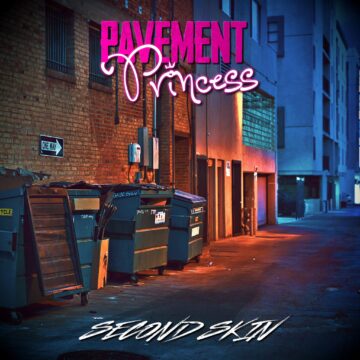 From Arbon (with slight edits):

“The main story behind this album is that René and I started writing songs for it in 2018. Our idea was to really write the songs together, instead of the more separate songwriting we did for our first album First Night Out, which for a small independent release was well received and that reception not only encouraged our songwriting for a follow up, but lent itself to the our humorous Christmas song. Thank you to those that supported the band “Ho Santa, Play It Louder” in November of 2018.

In June 2019, René passed away and for me it was pretty hard to continue this project, so it took me a while to get it back on track.

Over the last two years, I finished the songs taking every effort to keep them as close as possible to the original ideas. For me, it is sad to realize this will be the final Pavement Princess album, but it is a joy to look back on the years of fun and friendship René and I shared. Second Skin is our, well my swan song with Pavement Princess and I feel a befitting thank you to a great friend and musician. I still miss him a lot!”

From Sleaze Roxx‘s review of 2018’s First Night Out: “… there is not a track on this debut that won’t tickle your musical fancy. That dreaded skip button will be non-existent as René and Erwin are the true dynamic duo on this effort, a musical dynamic duo… Enjoy.”

Pavement Princess‘ “No Is The Answer” video: