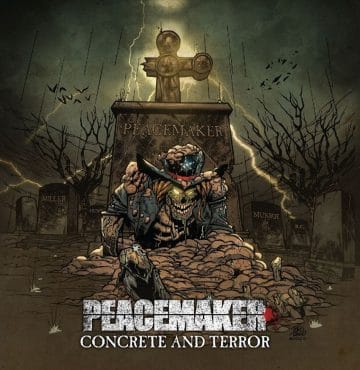 “The upcoming Peacemaker album, Concrete and Terror is now recorded. The track list is set. The album is mixed, mastered and done! Album art is nearly completed, and we are just as excited about the visual components of this album, as it steps far beyond typical knuckle-dragging genre defining metal nerdness, along with the mind-melting music.

We are working our keisters off to deliver a modern day old-school heavy metal album that has all the “BALLS” and whistles – an album that is nothing less than the “total package” that you would expect from an All-Star super-team heavy metal crew that makes Peacemaker so very special.

So, for now, we give you a glimpse into the world of Peacemaker, with the bands debut album art. This fantastic concept and visual was helped brought to life by the very talented art team of Diego Toro and Alonso Espinoza!! We think it’s killer!

We will also be announcing details for Pre-order information, along with a firm release date. Also, sign up for our e-mail updates at boonesoverstock.com.

Watch for more Brutal Planet news coming in the near future!

The wait is nearly over.
The time is coming.
Make your peace soon, with………
Peacemaker

Buy the BEST in METAL CDs / Vinyl at https://boonesoverstock.com/The full length PEACEMAKER CD and Vinyl to release on Brutal Planet Records in 2018 – sign u…