We have another new group consisting of former and current members of band such as Metal Church, Tango Down and House Of Lords. 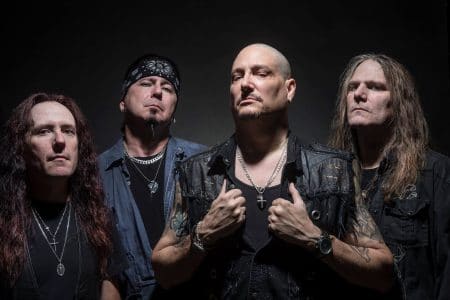 “BRUTAL PLANET is proud to welcome our first new signing.

Ronny Munroe: When Scott and I started talking about forming a band and doing a record together, we had a couple things in mind. One was to have fun, the other was writing songs that took us back to our youth when we first discovered metal bands like Iron Maiden, Judas Priest and Saxon. I believe we have accomplished that with this record, and we are stoked with the end result. We can’t wait for everyone to listen and melt some faces off with it.

Scott Miller: I have always wanted to make a “Heavy Metal” album. This is pure old-school heavy metal just the way I liked it when I was a kid metal. The common thread between Ronny and I while making this album was, what would our younger heavy metal fan selves think of this? We were inspired by making an album for our younger self when we were fans of old school heavy metal. I’ve waited my whole life to make an album like this. Mission accomplished, cut the check!

This is a new band, new sound, new chapter for both of us. We wanted to make sure this band, album and new partnership between Ronny and I had an equal new territory in who we worked with. Something that was new for both of us that we can call a shared home for the two of us. We found that with the bands label, Brutal Planet. We wanted to make sure that the label we were on was a “Heavy Metal” label. After all that is what this is, and that is the type of label it belongs on. Both of us still have our other projects and bands so lets not start any rumors. All the above can coexist.

So right now Ty Sims is producing our debut album for us and Brutal Planet. We did a photo shoot over the summer with the great Jeremy Saffer, and the album should be out by spring, and yes we may do a show or two or three or four or five. What I am saying is, we plan on playing out as much as possible and anywhere and everywhere.