With the recent unfortunate passing of former Y&T drummer Leonard Haze, Y&T frontman Dave Meniketti called in from Germany to speak to the one and only Eddie Trunk on the latter’s radio show on September 12, 2016. Meniketti reportedly advised Trunk towards the end of the call that former Y&T drummer Jimmy DeGrasso was working with former Ratt bandmates Stephen Pearcy (vocals), Juan Croucier (bass) and Warren DeMartini (guitar) in a band. Presumably, former Ratt guitarist Carlos Cavazo would also be part of the project if that is the case.

Ever since Pearcy posted a photo of himself alongside Croucier, DeMartini and Cavazo (along with drummer Greg D’Angelo), there has been a lot of interest and speculation that the former Ratt bandmates will work together again as Ratt (presumably if they can legally get the name from drummer Bobby Blotzer) or under a different band name. 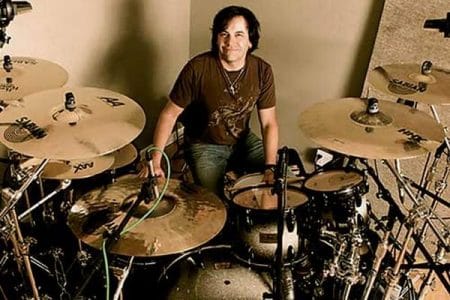 DeGrasso‘s career is described as follows on Wikipedia (with slight edits):

“DeGrasso originally auditioned for Ozzy Osbourne and played on the demos of The Ultimate Sin before Ozzy and Bob Daisley had a fallout and Ozzy chose to replace the entire band except for Jake E Lee. DeGrasso then joined the veteran metal band Y&T in 1986, replacing their original drummer Leonard Haze. He remained with the group into the ’90s. In 1991, he briefly filled in as White Lion‘s touring drummer when Greg D’Angelo left the band. He would go on to play on Dave Mustaine‘s (Megadeth vocalist/guitarist) side project band, MD.45 in 1995. Mustaine asked him to join Megadeth in 1998 as drummer and continue the band’s Cryptic Writings Tour. He was asked to play with Megadeth five days before the next show. He walked around with a walkman all day to memorize the songs. DeGrasso recorded and toured behind Megadeth‘s Risk album in 1999–2000, The World Needs A Hero in 2000–2001 and was featured on Megadeth‘s first ever live CD and DVD release, Rude Awakening in 2002.

Since Megadeth, DeGrasso has performed at the prestigious Modern Drummer Festival in 2002, Ultimate Drummers Weekend in Australia, Drummer Live in the United Kingdom and toured with Stone Sour (Slipknot vocalist Corey Taylor’s side project) and guitar legend Ronnie Montrose. Jimmy played with David Lee Roth Band in 2006 and joined with Ministry on their final tour in 2008. He is a highly sought after session player and drummer.

He currently resides in San Jose, California, where he used to run his own drum shop, San Jose Pro Drum, which has now closed.

In late August and early September, DeGrasso played 11 shows with Alice Cooper to fill in for Eric Singer while Singer played a few KISS shows in the United States.

DeGrasso has also been the full-time drummer for heavy metal band F5 and Hail (along with current Megadeth bassist Dave Ellefson).

In summer of 2012, DeGrasso toured with Dokken, filling in for Mick Brown who was touring with Ted Nugent.

It was announced in early 2014 that he would temporarily be filling-in for Bobby Blotzer in Ratt, and will possibly be playing with them on the Monsters of Rock cruise. He is the first drummer to have filled in for Blotzer, since he joined the band in 1982.”