Slowly but surely, singer Stephen Pearcy, guitarist Warren DeMartini and bassist Juan Croucier are inching their way closer to getting the Ratt name and brand back from drummer Bobby Blotzer.

The Ratt band spearheaded by Pearcy, DeMartini and Croucier has announced taking part in three major festivals so far consisting of the M3 Rock Festival (where it’s the headliner) on April 29, 2017; Rocklahoma which is taking part from May 26 to 28, 2017; and now, Rock Fest XVII on July 12, 2017.

What distinguishes Rock Fest XVII from the other two festivals in terms of Ratt is that the former is using the Ratt logo which has been currently in use by Blotzer‘s version of Ratt since in or about the fall of 2015. 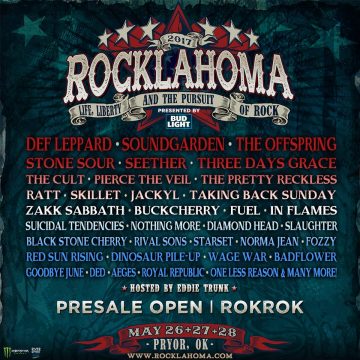 The last gig by Blotzer‘s version of Ratt on December 29, 2016 never happened for the drummer as his version of the band ended up not playing after the venue in question received a “cease and desist” letter with respect to the use of the Ratt trademarks. Apparently, Blotzer refused to play without using the Ratt logo, etc. and it was ultimately decided that his band would not play that night.

The next legal step between the two sides appears to be on January 23, 2017 when Blotzer’s WBS, Inc. is bringing a motion “for reconsideration” with respect to a motion for summary judgment won by Croucier‘s side against it back on November 8, 2016 and where the court opined that WBS, Inc. did not own the Ratt trademarks. Blotzer has taken the position that the motion decision back on November 8, 2016 was wrongly decided and in any event is not a “final judgment” on the Ratt trademarks issue.

With both camps now using the Ratt logo, it appears that an official court ruling on who owns the Ratt trademarks will have to occur sooner rather than later.