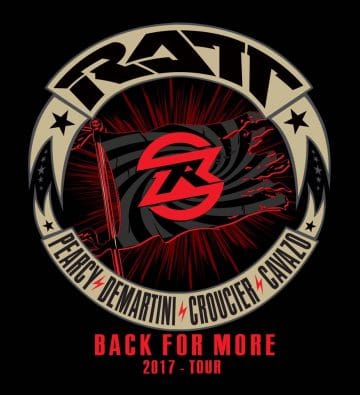 The following message was posted on Pearcy‘s Facebook page yesterday:

“RATT “Back for More” Tour 2017
Pearcy/De Martini/Croucier already writing and recording song roughs for a new RATT record. When, where they record and release this new record will happen. Ready when ready. TBA”

Infestation, which was the last Ratt studio album released back in 2010, received rave reviews and finished as the #2 album on Sleaze Roxx’s Top Ten Albums of 2010 and #1 on the Sleaze Roxx Readers’ Top 20 Albums of 2010. Sleaze Roxx stated the following in its review of Infestation: “Singer Stephen Pearcy sounds great, then again he has always delivered in a studio setting, but it is the tandem of DeMartini and Cavazo that steal the show with riff after riff.

For me Infestation is the biggest surprise in a long time, because I honestly didn’t think Ratt had it in them to create music this good at this point in their career. This is a CD that really caught me off guard. All too often an ’80s band will say they are returning to their roots only to leave you scratching your head wondering what they are listening to. In this case, Ratt was right on the money… Infestation is the rebirth of the classic Ratt sound.”

Ratt‘s “Eat Me Up Alive” video:

Ratt’s video for ‘Eat Me Up Alive’ from the album, Infestation – available now on Roadrunner Records. Visit http://www.therattpack.com/ for more!iTunes: http…