Stephen Pearcy was recently interviewed by Bobby Caughron of XS Rock and spoke about his new upcoming solo album Smash, the reformation of Ratt with guitarist Warren DeMartini and bassist Juan Croucier, and some of the issues with drummer Bobby Blotzer. 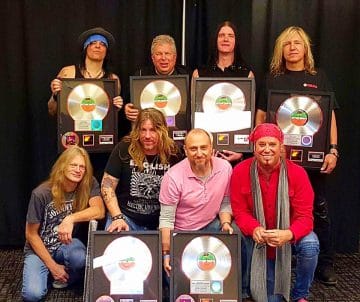 Back in early December 2016, Blotzer gave platinum records as gifts to his bandmates in his version of Ratt, which consisted of singer Josh Alan, bassist Brad Lang and guitarists Stacey Blades and Mitch Perry. The platinum records, which were displayed on the Facebook page of Blotzer‘s version of Ratt, were notable for having a photo of Ratt‘s Out Of The Cellar album, which was released back in 1984.

Pearcy was asked by XS Rock what he thought of Blotzer giving a platinum record to his touring band members that never played on the original album. Pearcy replied: “That’s the scariest thing that I’ve ever seen in my life. It’s so disrespectful to the fans. And I don’t want to dwell on this whole trip by any means. Our fans want the right thing to happen. Life is short. You can go out there and do your own thing but don’t tell people it’s something else. It’s destroying the true integrity of what we’ve created. It’s a whole new world and the dust is settling as far as the Ratt trip.”

Pearcy also was asked about a reported recent comment by Blotzer that Pearcy, DeMartini, Croucier and guitarist Carlos Cavazo might perform or record, but they wouldn’t be doing it under the Ratt name. Pearcy stated: “Me? I can do whatever I please. I do respect what a judge or jury says for a final outcome. I don’t go out there and try to convince somebody that what’s been happening isn’t actually happening. It’s not the Hitler method of tell them enough and

they’ll believe it. We know what we’re doing. We’re doing things properly. And that’s it. We’re not out to bash anybody. We’re not trying to convince people of anything. They know who’s who and who does what. I’m not going to say someone’s Warren De Martini when they’re not. Our audience is not stupid. Our fans have been with us. They’re smart people. They believe in it. And they’re backing the right thing.”

XS Rock also asked Pearcy what he thought of the current hard rock music scene and if there were any new bands out there that he really liked to which he replied: “Yeah. My daughter has turned me on to some new bands. Like Sleeping With Sirens. There’s some good new bands out there. And of course, I’m still a fan of bands that I grew up with. That’ll never go away. That’s why our audiences are still fans of Ratt. You grow up with it, you like it and it stays with you. There’s some really good stuff out there. I’m amazed at all of the female players that have come up lately. There’s a lot going on, the door’s open. Everything’s been done, so now it’s who’s going to do something different? People’s attention span is so short. With guys like us and what we grew up with, it wasn’t like that. You listened to the whole record, not just a couple of singles. That’s why you don’t have platinum albums these days. That used to be something that you worked for. It is what is now. The whole medium is different. What can you do? You either adapt, lead follow or get the hell out of the way, you know.”

You can read the rest of the interview with Pearcy at XS Rock.