Back in November 2018, Gene Simmons and Paul Stanley “bragged” about some of the bands that had opened for KISS over the years including Rush, AC/DC and Judas Priest.

No opening band has yet to be announced for KISS‘ End of the Road World Tour but according to Ticketmaster, it appears that performance painter David Garibaldi will be part of the festivities during KISS‘ first Toronto tour stop at the Scotiabank Arena in Toronto, Ontario, Canada on March 20, 2019. KISS are scheduled to return to play the Scotiabank Arena in Toronto on August 17th.

The 36 year old Garibaldi‘s “Biography” on his Facebook page states:

“Artists transform an empty canvas into a work of art through their skill, experience, inspiration and senses. David Garibaldi’s life and transition into a world-renowned performance painter is no different. His show Rhythm and Hue is a music and color experience. Large pop portraits explode together on stage in minutes to music. Paint, sound, and entertainment collide for an entertaining show that has brought people around the world to their feet.”

Both Garibaldi and Stanley appear to have paintings for sale on Art Brokerage and Garibaldi‘s paintings that are for sale include ones of Bret Michaels and Jimi Hendrix. 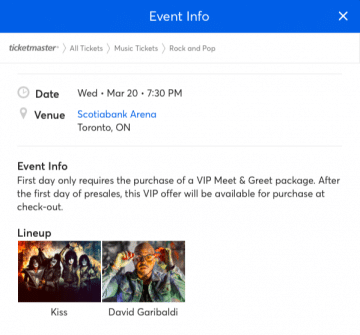