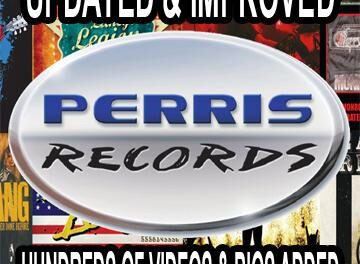 American record label, Perris Records, which has been spearheaded by Tom Mathers since day one, has a new updated and improved website! Perris Records‘ press release indicates (with slight edits):

“Check out the Perris Records new and improved updated website. Featuring videos and full bios on all Perris Records artists. Many labeled distro and import CDs have videos when you click on the CD covers, videos will pop up in a new browser. Perris is also shipping to Canada & Overseas now with a 100% success rate.

Perris Records is about building relationships with bands and their fans who want the music! I’ve been friends with Tom for over 25 years, watching him move from musician to Perris records owner. He lives and breathes this rock n roll circus!! Keri Kelli (Night Ranger, Slash’s Snakepit, Ratt, Warrant, Big Bang Babies)

I’ve known Tom Mathers since 1996, and have even recorded a CD for Tom’s band Cherry Street-Buster Cherry.  In my dealings with Tom I have found him to be honest, hard-working, and a true survivor of the business who has helped to further heavy metal/rock through his record company Perris Records. He is also pleasant to deal with and professional in the way he conducts his business. Brian Vollmer (Helix)

“Thank you Steve Whiteman and window of truth he has opened for  us all, for the man does not lie when he talks about Tom at Perris.” Jason McMaster (Broken Teeth, Dangerous Toys)

“Perris has the finger on the Pulse of 80’s Rock! Check em’ out!”  George Lynch (Lynch Mob, Dokken)

In a day and age, where the great “Rock’n’Roll” bands of the 80’s and 90’s, are on the most endangered list. It is great to know that their are true dedicated soldiers like Tom Mathers, fighting to keep our music alive and available, and giving band a chance to have their music released on a record label, when our old labels and so called record company friends have abandoned us. All the power to you Tom. Mike Tramp (White Lion)

Tom is one of a kind!  He helps keep our genre of music alive! doing business is always so easy with him, he is so up front. He is a good person to know! Terry Ilous (XYZ, Great White)

We’ve been working with Perris Records for 10 years now and it’s been a great relationship. Tom’s always been straight up and nothin’ but professional. He’s been a great asset in helping us stay connected with our fans. Steve West (Danger Danger, Low Dice Records)

As a producer and artist I have worked with lots of Major Record  Labels, but no one beats Perris. I have nothing but good things to say, PROFESSIONALS. Chris Laney (Pretty Maids, Zan Clan, Animal)