Hungarian rockers Peter Kovary & The Royal Rebels have released a video for their track “Run For Cover.” 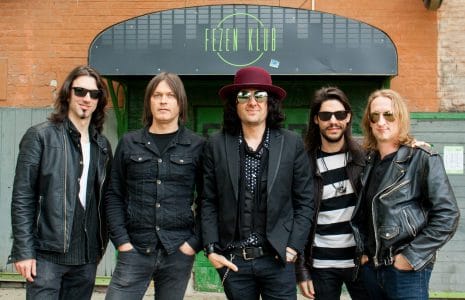 The band’s press release states in part (with slight edits):

“Classic rockers Peter Kovary & The Royal Rebels released their debut album ‘Halfway Till Morning’ in February 2017. ‘Run For Cover’ is their third video from the LP – their best so far -, and probably it’s the heaviest one on the album, a 70’s style hard rock anthem with loud guitars, mind blowing Hammond sound and catchy vocals .

The guys just got back from their first Middle-European tour, they played in Italy, Austria, Czech Republic, and of course a few shows in their home country, Hungary.

The Royal Rebels was founded by hungarian multi instrumentalist Peter Kovary a year ago. Peter Kovary became a well known musician in Hungary in the beginning of the 2000s, when he joined hungarian superstar pop band NEO as a singer / guitarist. Besides he was also a singer of a Rolling Stones tribute band called Stoned for five years. Last year, Peter – after 12 years – had left NEO and founded his new rock’n’roll band called Peter Kovary & The Royal Rebels. He returned back to his roots: to classic rock (in the 90’s, before the NEO period, he had a classic rock band called The Ragdoll)…

The music of the Rebels is a mixture of the 70’s classic rock (Stones, Beatles, Zeppelin), the 90’s, 2000’s retro rock (The Black Crowes, Lenny Kravitz, Wolfmother), with a little southern rock flavour (The Allma Brothers), and a modern twist of today’s vintage rock scene (Rival Sons, Blackberry Smoke). The debut album is out on February 2017, meanwhile the band kicks off with an album release tour as well.”

Peter Kovary & The Royal Rebels’ “Forever And A Day” video: