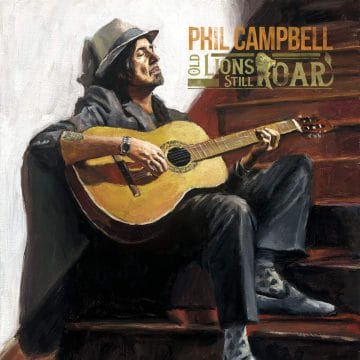 Amazon states as follows (with slight edits): ““This is something I wanted to do many years before Motörhead finished. I talked to Lemmy about it many times and he always encouraged me. It just never came about because we were touring so relentlessly. But I kept the odd idea and riff from way back and never abandoned the idea. Now I felt the time was right to do it.” – Phil Campbell.

Some people just don‘t need an introduction and the Welsh rock titan Phil Campbell is on top of that list. As the guitarist of Motörhead for more than 30 years, father of his hard rocking spawn Bastard Sons, and a rock and roll luminary, Campbell is the stuff six string legends are made of. Slowly but steadily nearing his sixties, Phil Campbell still hasn‘t lost his hunger for the noise. After a highly successful record as Phil Campbell and the Bastard Sons (the family rock act he pulled off with his own three sons) and a feverish run of live dates with the likes of Guns N’ Roses, he‘s about to shed his skin once again – only to reveal his own true self this time around. Ladies and gentlemen, we finally give you Phil Campbell solo, no strings attached, straight in your face, no remorse rock and roll. “Old Lions Still Roar” is armed with an arsenal of fierce riffing, anthemic hooks, pumping energy and no-holds-barred hard rocking fuel.”