Def Leppard guitarist Phil Collen was recently interviewed by Rock Cellar Magazine and asked about being one of only two people (the other being Aerosmith guitarist Joe Perry) to have ever jammed with KISS onstage.

Collen replied: “Someone mentioned to me about getting onstage to pay with KISS and asked if I’d be up for doing it and I said, “Yeah, if everyone’s cool with it, absolutely!” Then it was, “Okay, what song do you want to do?” I could have chosen anything on their set list and I picked the song “Deuce.” 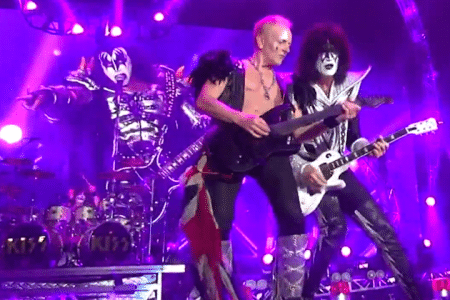 The hardest part was being able to walk around in those KISS boots (laughs). I had to walk around all day in them trying to get used to those boots. I out them on and went, “Oh my God, how do you do this?!” Gene let me put on his boots a couple of weeks before. You had to really careful because in those boots you could easily bust your ankle. So I jammed with KISS and I wound up wearing a set of Paul’s boots, which were like seven-inch heels. That was such fun.

As I was walking onstage, the production manager said, “Oh, by the way don’t step back past that line because the flames will get you.” I was like, “Oh My God!” So I’m trying to stay balanced wearing these seven-inch boot and remember the song, which was “Deuce,” and make sure not to go too far back or I’d get burned. But I have to say, it was such a thrill to play with KISS. I was honored.

We got on great with KISS. Touring with them was so much fun. They’re so professional. They’re so into the theater and the art part of it; it’s just amazing.”

In terms of what he learned from famed producer Mutt Lange who produced a number of Def Leppard albums including the Diamond certified selling records, Pyromania and Hysteria, Collen stated: “Well, I’m producing the new Tesla album and what I’ve applied 100% is that work ethic. Most rock bands don’t push the bar too much of they get success and they stop doing it. Mutt would go, “No, that’s just the starting point. You can be ordinary, you can be average. You need to go way beyond that. We’ve gotta make the song better, the melody’s gotta be better and the grooves gotta be better. The lyrics have to be better too, not necessarily profound but they’ve got be right for the song.” So you could have a song like “Pour Some Sugar On Me,” which is a silly fun pop song. So just the idea of working a lot harder came from Mutt. So we apply that to everything we do and the Tesla album is no different. I’m making them work a lot harder.”

You can read the rest of the interview with Collen at Rock Cellar Magazine.

KISS playing “Deuce” with Phil Collen in Atlantic City in 2014: