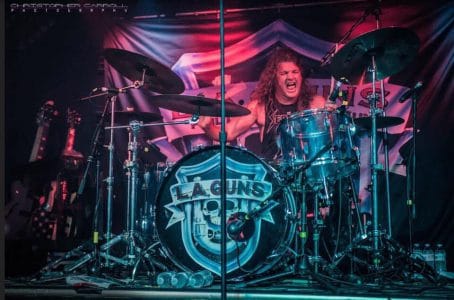 With the recent news that drummer Shane Fitzgibbon has left L.A. Guns and is being replaced by Scot Coogan (Lita Ford, Ace Frehley, Lynch Mob, Brides of Destruction and many more). L.A. Guns frontman Phil Lewis has apparently provided the reason why Fitzgibbon left the band as he indicated in a Facebook comment on a message thread started by Sleaze Roxx contributor, ace photographer and Your Backstage Pass! closed group Facebook page administrator Christopher Carroll:

“Shane quit for an amazing studio gig building rooms for Rick Rubin we wish him all the best and welcome Scott Coogan who along with Ace Johnny Tracii and myself will continue our world domination objective.”

Fitzgibbon describes himself as follows on his Facebook page:

“I am a musician, sound engineer, and producer whose home base is behind the drum kit and in the studio!”