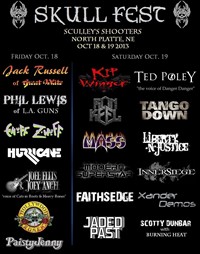 Skull Fest have announced that L.A. Guns frontman Phil Lewis and former Great White singer Jack Russell will be both playing the festival on Friday, October 18th. Russell will be joined by guitarist Robby Lochner to perform in a special ‘Story Tellers’ format at the show.

The two day Skull Fest event takes place at Sculley’s Shooters in North Platte, Nebraska on October 18 and 19th. Early bird ticket prices are $25 a day or both days for $40. Skull Fest will also be offering VIP tickets (only 50 per day) at $60 a day or $85 for both days. VIP includes a laminated VIP pass, special meet and greets, special seating, and a poster. Seating for the festival is limited to 750 people per day, so be sure to buy your tickets early by visiting www.tickettailor.com.

More information on Skull Fest, and to vote on the final band to appear on Saturday, can be found at www.facebook.com/skull.fest.39.