Phil Lewis fires back at Kelly Nickels’ claim that he was not asked to take part in L.A. Guns reunion

Lewis had recently been interviewed by the White Line Fever podcast during which he stated that both Nickels and former L.A. Guns guitarist Mick Cripps had been asked but refused to take part in the band reunion involving Lewis and Guns.

Nickels posted a message on Facebook yesterday stating that “We were not asked….!!!”.

“Nonsense. I have your number in my phone. I called and asked if you’d be willing to help me work on a song and your response was “That songs beat(crap) and it’s all or nothing if you want my help.

Not only would you have lasted less than a week away from your privileged lifestyle. You couldn’t hold a candle to Johnny Martins playing

You’ve got a minute of attention. Enjoy it and crawl back under the stone from where you came.”

With respect to Cripps and even though someone posted about the guitarist now playing in The Brutalists, Lewis opined on the same aforementioned Facebook thread: “Mick has no interest in touring with us or anyone”. 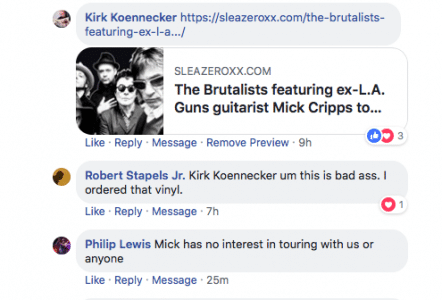