It had been seemingly more than a year since we last heard from singer Phil Lewis bashing the members of the L.A. Guns version spearheaded by drummer Steve Riley and bassist Kelly Nickels.

guitarist Kurt Frohlich will be releasing their first album since Lewis left the group in December 2016 to join forces with guitarist Tracii Guns in another version of the band.

Appice and Bain were part of the original Dio line-up that also included former Black Sabbath and Rainbow frontman Ronnie James Dio, guitarist Vivian Campbell and keyboardist Claude Schnell. Appice handled the drums while Bain played bass on Dio‘s first four studio albums, Holy Diver (1983), Last In Line (1984), Sacred Heart (1985) and Dream Evil (1987). According to Wikipedia, Appice left Dio in 1989 before returning for a second stint from 1992 to 1998. Bain left the band in 1989 before returning for two stints from 1992 to 1993 and 1999 to 2004. It is generally understood that Ronnie James Dio was the driving force and owner of the Dio entity. Ronnie James Dio died in May 2010 while Bain passed away in January 2016.

The situation in L.A. Guns appears quite different from the one in Dio. While it’s true that Tracii Guns founded L.A. Guns in the early 1980s, Riley joined the band shortly after the debut self-titled album was recorded and he’s been in the group ever since with the exception of a three year period when he was apparently fired in 1992 before being welcomed back in 1995. Of note, Guns later elected to share the ownership of the L.A. Guns band with Riley in the late 1990s on a 50-50 basis. According to Wikipedia, Guns first left L.A. Guns in 2002 and eventually decided in 2006 to forge ahead with his own version of L.A. Guns with a multitude of different singers until 2012. In 2016, Guns joined forces with Lewis under the moniker L.A. Guns for select shows including the Rock N Skull Festival in late October 2016 (where Lewis did double duty performing in both bands). In December 2016, Lewis announced that he was leaving Riley‘s version of L.A. Guns and it was confirmed shortly afterwards that he was joining Guns‘ version of the band. 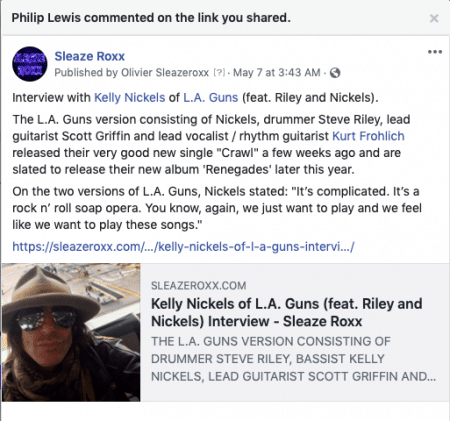