L.A. Guns frontman Phil Lewis was recently interviewed by White Line Fever podcast and spoke about L.A. Guns‘ strangest tour when the sleaze rockers went to Australia in 2011 to do the Metal Health Tour, which was promoted by a now defunct company called Intense Impact. At the time, L.A. Guns included Lewis on lead vocals, Steve Riley on drums and Stacey Blades on guitar.

Lewis takes up the story (as transcribed by White Line Fever). “Clusterfuck, yeah that’s a good word for it. It wears the crown. ‘What is the most bizarre thing that ever happened, what is the strangest tour story?’” 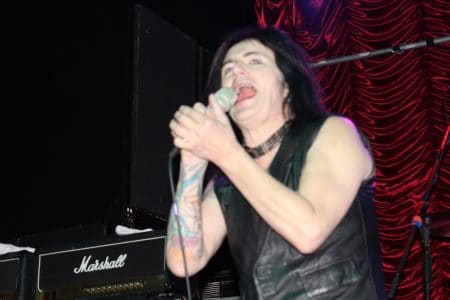 “It’s something that happened in 2011. We were booked to do an Australian tour with Quiet Riot and they pulled out but the promoter insisted he still wanted to go ahead with us and he brought tickets, he bought the flights to bring us over so we assumed everything was alright.”

“We arrived in Sydney and it was a little fishy from the second we got there. He showed up an hour and a half after our flight – in a taxi. We’ve got all our gear, all our equipment, all our guitars … we’ve got about 30 pieces of luggage and he shows up in a cab. We know it was doomed. It took forever to get into a hotel, to check in…”

“But the thing that sealed it: we were going to drive down to Melbourne from Sydney, it was going to be an overnight drive. And as we were pulling out, leaving the city, there’s a big fist fight going on at the front of the bus. We’re sharing it with the crew and the promoter. It’s actual fisticuffs. We get 15, 20 miles down the road and they start throwing bottles at each other.”

“We’re halfway between the two cities and the bus driver has had enough of this. He pulls over at a truck stop and the law are waiting and they arrest the promoter!”

“So we carry on down to the gig. We get there early morning and we go to the hotel and it’s so fishy, nobody’s there. So we go and have a look at the theatre where we’re supposed to be playing that night and there’s an old boy in there mopping the stage.”

“There’s no equipment, no lights, no PA, no backline, no drums, no nothing. Obviously we’re fucked. This is like … it’s great fun and everything if this is your home town or it’s just a few hundred miles away but we’re far. You know, our flights had been paid for but if we wanted to change our flights to get home, it was $2,000 per man. There’s five of us.”

“We ended up getting the promoter’s partner and we literally did, we hung him off a balcony, from the hotel, from the seventh floor window, until he came up with the 10 grand, so we could change our flights.”

You can listen to the interview with Phil Lewis via the White Line Fever podcast.