L.A. Guns frontman Phil Lewis continues to seemingly be frustrated with his now ex-long-time bandmate Steve Riley exerting his apparently legal right to play under the name L.A. Guns at the M3 Rock Festival while Lewis and guitarist Tracii Guns forge ahead with their version of L.A. Guns while releasing new material (The Missing Peace in 2017 and The Devil You Know in 2019).

When someone indicated on a M3 Rockers‘ Facebook thread that the L.A. Guns version spearheaded by Lewis and Guns was not going to play the M3 Rock Festival anymore, Lewis responded with the comment that “We’re doing our best to avoid the nostalgia circuit.”

When someone else asked Lewis if L.A. Guns would still be playing the Monsters of Rock Cruise, Lewis replied: “Not at all. MOR are our friends and appreciate the work we’ve done. It’s always an honor.” Lewis was then questioned on that comment (both the Monsters of Rock Cruise and the M3 Rock Festival cater mostly to ’80s era ‘hair metal’ bands) as the L.A. Guns singer was asked: “Philip Lewis so you’re saying that the biggest festival in the country dedicated to 80’s Rock is part of the “Nostalgia Circuit”.”

This prompted Lewis to reply with the comment: “Gregg Picard Oh you got me Greg. Now please go play in traffic.”

In an interview with Sleaze Roxx back in March 2019, Lewis acknowledged that Riley had a legal right to the L.A. Guns name as he stated: “All that stuff went down when I wasn’t in the band. I guess it had never been registered — the trademark or whatever — the rubber stamp. And I wasn’t in the band. I wasn’t even in music. I was working at Fox and I really couldn’t care less what they did. I guess it was as simple as writing out an application, standing in line at the courthouse downtown and having it stamped, and they made no stipulations. They said, “OK. We got the name 50-50.” And that was it. That was the legacy that ensued after that. That’s the piece of paper. It’s ridiculous and Tracii should have never have done it. He knows that but he did. Just have to deal with that.” 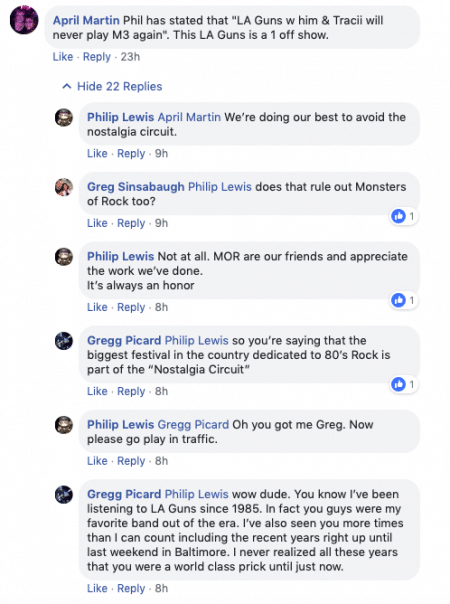 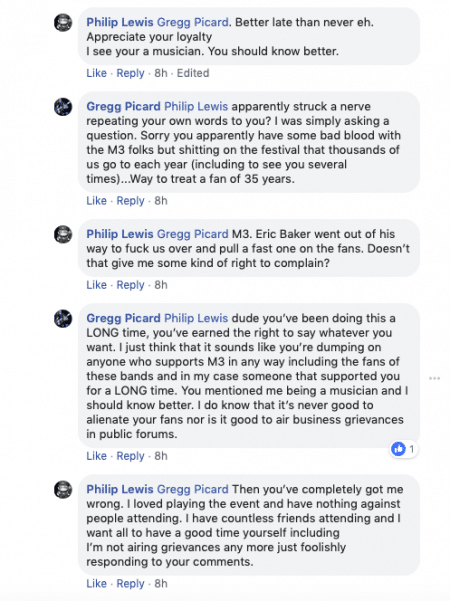