Phil Lewis to play in two versions of L.A. Guns including one with Tracii Guns

After learning that singer Phil Lewis and guitarist Tracii Guns will be playing and recording together as L.A. Guns in 2017, Sleaze Roxx photographer/writer Christopher Carroll was advised by Lewis that he will actually be playing in two versions of L.A. Guns next year. 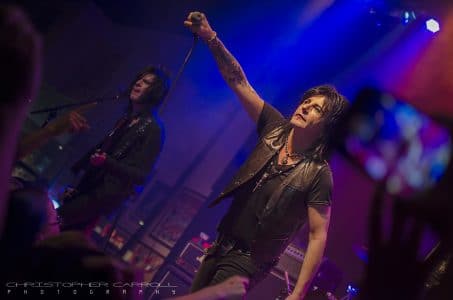 Lewis stated to Carroll: “I was invited to join Tracii for the Irvine slot [that took place last weekend] last year. I have another solo acoustic show at Rock N’ Skull that Tracii‘s going to play with me and that will be all the things I’m doing with Tracii this year. I’m back to work with Riley and the boys Thursday night and pretty much every weekend until the end of the year.”

With respect to Tracii Guns rejoining L.A. Guns and writing music together with him, Lewis stated: “Tracii and I are writing together but he’s not joining the Riley version — the current version of LA Guns that includes drummer, Steve Riley. Confusing ain’t it Chris, three versions and I’m in two of them. It’s a wonderful time for True LA Guns fans to have completely different versions playing vastly different sets. Win-win for me.”

It has been common knowledge that the relationship between Riley and Guns deteriorated while they were in L.A. Guns together. The one and only Eddie Trunk interviewed Tracii Guns back on August 22, 2016 (see YouTube video below) and the latter confirmed that the main issue for him not rejoining L.A. Guns was Steve Riley. Guns also confirmed to Trunk that when he works with Lewis, Riley is not part of it. Trunk queried how Lewis framed that with Riley to which Guns replied: Yeah. I’m very curious too. I mean, we have some stuff… that he hasn’t talked about and I haven’t talked about yet coming up in March. The record doesn’t come out until June next year but we’re doing something, you know, big for us in March. As soon as I get confirmation, I’ll let you know right away…”

On stage right for a reunion show with the Guns

Interview by Eddie Trunk with Tracii Guns on August 22, 2016: