Former AC/DC drummer Phil Rudd is keeping the door open to playing in AC/DC but reportedly is not interested in playing with Axl Rose in the band.

Rudd was interviewed by Bay Of Plenty Times columnist Annemarie Quill whose article was published at nzherald.co.nz, which reported the following about Rudd and AC/DC: 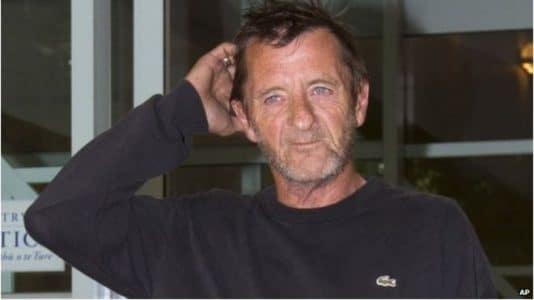 “Rudd said he would not rule out a return to AC/DC but said for now he was focusing on his own music with “Badge and Spence.”

“Geoffrey [Spencer] is a great guitarist, just as good as Malcolm, better than if you ask me.”

Rudd played drums on AC/DC‘s 17th studio album Rock or Bust and recorded it together with the band in Vancouver, Canada, but his Tauranga arrest ended his chances of going on the Rock or Bust world tour. Chris Slade replaced him and the band finished the European leg of the tour in June with Guns N’ Roses front man Axl Rose roped in when vocalist Brian Johnson had to give up the tour in April due to hearing loss.”

The nzherald.co.nz article also had some quick facts on Rudd‘s history which are as follows:

* Born Phillip Hugh Norman Witschke Rudzevecuis on 19 May 1954 in Melbourne.
* Drummer in Aussie rock band AC/DC from 1975 until 1983, and again from 1994.
* AC/DC is the fourth biggest selling band in the history of recorded music.
In 2003, he was inducted into the Rock and Roll Hall of Fame along with the other members of AC/DC.
* Rudd lives in a waterfront mansion in Bureta, Tauranga
* He moved to New Zealand in 1983 after being sacked from AC/DC and stayed here after he rejoined.
* In 2011 he bought a restaurant at Tauranga’s Bridge Marina Phil’s Place. He also owns a cafe the Last Gasp.
* Motorsport fan known for his collection of “toys” including a helicopter, a launch Barchetta and a supercar collection including a Ferrari 599, an NZV8, a 2010 Mercedes SLS AMG with the numberplate Sonor, a 2011 Bentley Mulsanne, and a Can Am race car
* This year was named one of the top 100 drummers of all time, coming in at number 86 on Rolling Stone magazine’s list of drumming greats
* Six children Steven, Thomas, Jack, Milla, Tuesday and Lucia

You can read the rest of the Rudd article/interview at nzherald.co.nz.