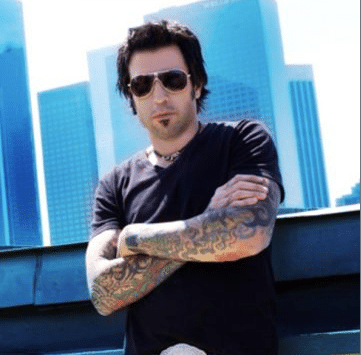 Red Dragon Cartel drummer Phil Varone has apparently had enough of drumming as he has officially announced his retirement from drumming and he is currently reportedly doing his last tour as a drummer. Back in February 2017, Red Dragon Cartel announced Varone as drummer Jonas Fairley‘s replacement. Varone played on Red Dragon Cartel‘s latest studio album Patina, which was released via Frontiers Music Srl in November 2018. 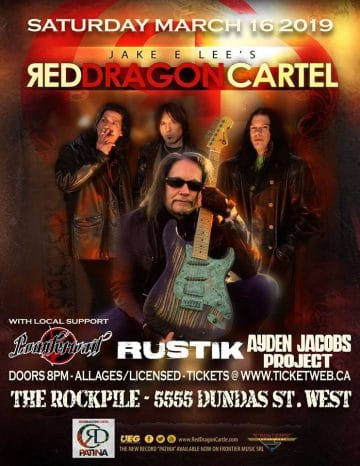 instead of making me happy… When you’re not happy or lose the passion in anything you do, it’s time to gracefully bow out. After 30 years I’m gracefully bowing out. I just recorded the greatest record of my career with Jake E Lee and Red Dragon Cartel, and I’m playing with the greatest players of my career. I leave in a good , grateful place. I have the best fans in the world, and I truly thank you from the bottom of my heart for the love, for the support and for being apart of my musical career…I hope you follow me to the next chapter of my life, when the time comes… until then, thank you for 30 years a drummer…”

“- last night in Joliet…Only a few more shows left on the PATINA TOUR, and my farewell to drumming… catch them while you can…”

Varone‘s apparent “love / hate” relationship with drumming and touring appears to be nothing new. In an interview with Sleaze Roxx back in July 2007, Varone stated: “I have no desire to join a band. I would do a few shows here and there, but never join. I have moved on and loving comedy and writing. Actually, I would play drums for Britney Spears.. I love her..” 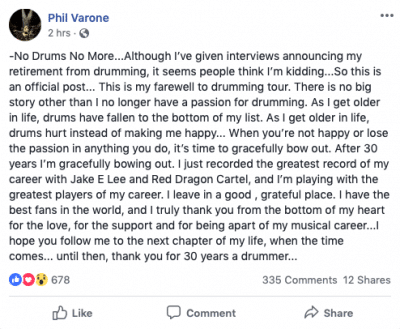 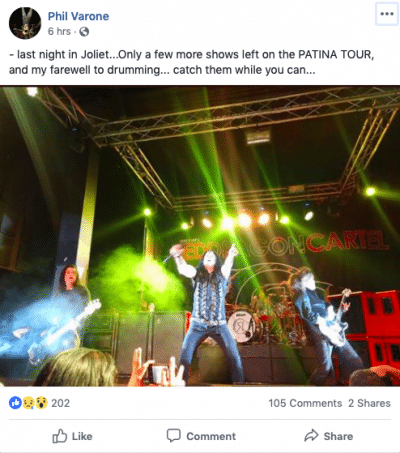