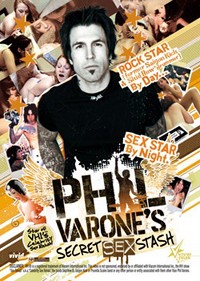 “What better to celebrate summer than with a personalized copy of new celebrity sex tape?” exclaimed Phil Varone, as pre-orders have opened for the release of the two-disc DVD set, Phil Varone’s Secret Sex Stash, on the Vivid-Celeb imprint, in stores nationwide Tuesday, July 5.

“I am pretty excited with next week’s release of my first sex tape,” said Varone. “This was the first time for me with the incredible five girls on this tape, and I loved every minute I had with each of them.

“Sex has been the defining element in my life and both the movie and my website document my continuing extraordinary adventures,” added Varone, who noted that viewers of the movie online will see bonus footage and the site will be updated monthly with more scenes.

Over the years, Varone has been branded as a sex addict and has appeared on VH1’s Sex Rehab with Dr. Drew. “They’ve got an addiction claim for everything you can do, but I never considered myself a sex addict because sex never screwed up the rest of my life or my ability to function at a high level,” said Varone says. Varone has appeared on many TV shows including Miami Ink, Californication, NUMB3RS, Oprah, The Tyra Banks Show, The Today Show and many others.

Fans who live in or near Chicago will have the opportunity to meet and party with Varone, who will be making an exclusive personal appearance at Exxxotica Chicago, where he will be signing copies of Phil Varone’s Secret Sex Stash July 8-10 at the Donald E. Stephens Convention Center, 5555 N. River Road in Des Plaines, IL 60018. On Friday night July 8, Varone will host the Cock and Loaded after-party, to which all 3-day ticket holders for the convention will be admitted for free. The after party is from 11 p.m. to 3 a.m. at the Hyatt Regency O’Hare’s Rosemont Ballroom.